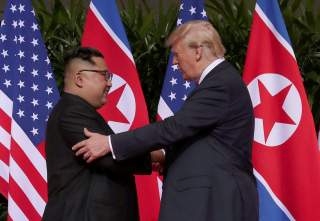 When you are walking into the woods, it is difficult to know at what point you start walking out. Since the process of denuclearizing the Korean Peninsula and potentially unifying North and South Korea could take decades, it is hard to know whether we are out of the woods yet. We may only know if President Trump’s unorthodox approach toward Pyongyang is working by looking back many years from now. After decades of failed U.S. policy, however, it’s worth trying something new. Here is a likely scenario for North Korea going into 2019.

After some dramatic uncertainty and even another threat of cancelation, a second summit between Kim and Trump takes place in early 2019 possibly in a Southeast Asian country again. At this meeting, the two countries could achieve several things.

They could articulate the details of what building “new relations” between the United States and North Korea and establishing a “peace regime” on the Korean Peninsula means, as proclaimed at the Singapore summit last spring. Alongside the rapprochement with South Korea already taking place, such U.S.-North Korean initiatives could include reducing sanctions, opening up trade and investment, and normalizing diplomatic relations. The countries may issue a statement, along with South Korea, declaring an end to the Korean War—short of a peace treaty but meaningful nonetheless. While North Korea will not give up its weapons up front, it could offer the intermediate step of providing disclosure and dismantlement of a nuclear facility.

If the two countries are able to achieve any one of the items above, that would pave the way for a long-term path toward denuclearization and possibly over the much longer term the unification of the peninsula, perhaps as “one country, two systems,” by altering the Asian security environment. It would forestall a return to the threat of war. The summit would take place a year before the 2020 presidential elections, so Trump would have an incentive to produce at least the veneer of success with North Korea. Such relatively low-cost measures would give Trump a political win at home, continue the momentum of progress, and maintain peace.

As the stronger power, the United States is in the position to end the vicious cycle of distrust and arms build-ups. If these steps are taken, we may finally be walking out of the woods after seventy years of hostility.

Devin Stewart is the senior fellow and director of the Asia program at Carnegie Council for Ethics in International Affairs and a Truman Security Fellow. He has served as an adjunct professor of international affairs at Columbia University and New York University. The views expressed here are his own. Follow him on Twitter: @Devintstewart.