The Dire Necessity of Strategic Concessions and Relationship Building in U.S.-North Korea Relations 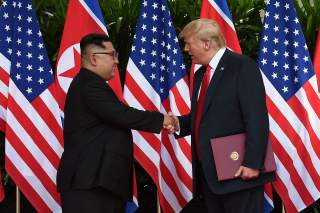 Looking back at U.S. responses to North Korea’s nuclear program, one would think that they are looking at a modified model of the five stages of grief. The United States has gone through everything: denial, anger (see: “fire and fury”), bargaining, depression, denial again. Yet, try as we might, we cannot hide from established fact—North Korea has developed the capabilities necessary to target U.S. bases and homeland territory with nuclear weapons, and it has been able to target U.S. critical allies in Asia for far longer. With Kim Jong-un showing no indication of a willingness to completely give up his nuclear arsenal in the near future and with little in the way of engagement since the second summit in Hanoi, where do we go from here?

On the surface level, U.S. President Donald Trump’s current policy of maximum pressure appears to have worked. After all, Kim was brought to the bargaining table in a historic United States-North Korea summit in 2018. However, attributing the summit to a policy that was hawkish at best, and brought the United States and its allies to the brink of nuclear war with North Korea at worst, would be blatantly overlooking history. To praise “maximum pressure” would also be downplaying the decades of North Korean precedent to meet pressure with pressure and diminishing crucial peace-keeping role that South Korean President Moon Jae-in undertook to alleviate tension on the Korean peninsula.

Indeed, maximum pressure did not coerce Kim into meeting with Trump—a series of calculated diplomatic efforts at negotiation and engagement did. In fact, it was the continuous hardline push for Complete, Verifiable, and Irreversible Dismantlement (CVID) indicative of maximum pressure logic that undermined the second summit in Hanoi, leaving both parties frustrated at the lack of progress. Since then, there has been little more than silence.

However, despite President Trump’s willingness to bide his time on North Korea, there is only so much longer that the United States can play the waiting game. The Obama-era policy of “strategic patience” that Trump is re-using continues to lead to the same problems: exacerbated tensions through a lack of active engagement and communication.

Moreover, North Korea is not without options should Washington choose not to engage. It’s no mistake that Russia delivered 2000 tons of wheat to North Korea as a good will effort. It was a message – if you don’t negotiate with them, we will. There is nothing to gain and everything to lose in dragging out what must ultimately be done: the time to enact policy that fosters careful and intentional relationship building with North Korea is now.

Refusing to negotiate with North Korea until their nuclear program is entirely dismantled is not only an unreasonable strategy, it disregards the logical reasoning for Pyongyang’s acquisition of a nuclear weapon in the first place: the strategic need for a weak state to have viable deterrent to defend against invasion or regime change. The Korean peninsula is surrounded by economic giants, leading to a “shrimp among the whales” mentality that has existed on the Korean peninsula since the Joseon era. With China to the North and the United States, South Korea, and Japan knocking at its door in the South, it’s no wonder North Korea is insecure.

For Kim, a nuclear weapon serves as his insurance policy against any nation that challenges his status quo. As long as he has a nuclear deterrent, Kim retains the option of credibly threatening to preemptively strike to prevent foreign acts of aggression and has the ability to leverage North Korea’s key security concerns on an international platform.

However, there are diminishing returns for acquiring a nuclear weapon. Now that Kim has proven that he has the means necessary to protect his interests should they be put under pressure, he himself has announced that his focus has shifted to improving the economy and standard of living in North Korea. Stockpiling nuclear weapons now will only undo the progress Kim has made in legitimizing his role as a worldwide leader and undermine the diplomatic efforts he has undertaken in the past year. That is, provided the United States doesn’t threaten violence again. Making North Korea feel insecure by threatening a pre-emptive strike, even if conventional, will only inspire a security dilemma that lead to the same set of brinkmanship that the world witnessed in 2017. What’s done is done: Kim will not give up his nuclear weapons without a fight. Heedlessly pursuing a strategy that will inevitably result in conflict is not without its consequences. Does the United States really want to face them? Millions of people dead or injured, Seoul completely annihilated, and a nuclear weapon dropped on American soil? And, for what? Should the United States continue down the path of maximum pressure, this could be the future.

It doesn’t have to be. The United States is in an optimal position to demonstrate its dedication to building up a mutually beneficial relationship with North Korea, gradually undoing decades of bad-will and distrust. Within the next few months, the first step Washington must take is opening up a formal channel of communication like a liaison office between the United States and North Korea, as this action would help avoid any miscommunication that could result in rising tensions.

Next, let’s focus on alleviating North Korea’s key security concerns. In return for decreasing joint U.S.-South Korean military exercises, the United States can begin pushing for former Center for International Security and Arms Control (CISAC) co-director Siegfried Hecker’s “Three Nos”: “1. No new weapons; 2. No better weapons; 3. No transfer of nuclear technology or weapons.” This does not mean an immediate removal of U.S. troops from South Korea or a complete abandonment of our dedication to denuclearizing the Korean peninsula. The steps for an easing of tensions need to be small and built up to larger concessions as the relationship between the United States and North Korea grows stronger.

An easing of military exercises could also be done in conjunction with gradual lifting of sanctions in certain economic sectors. Sanctions that impact North Korea’s raw-material and textile industries are of particular value, as these are areas that Kim has expressed prior interest in expanding because they would help bolster the North Korean economy. As key checkpoints, such as the verified halting of uranium enrichment are reached, the United States can also make efforts to help solve North Korea’s energy shortage, as Washington promised in the Agreed Framework. All of these actions can be done in exchange for increased transparency like allowing comprehensive International Atomic Energy Agency (IAEA) investigations, signing North Korea back onto the Treaty on the Non-Proliferation of Nuclear Weapons (NPT), and fostering a formal end to the Korean War through a peace treaty as a gesture of good will.

Should the United States and North Korea meaningfully follow through on future agreements, there exists potential for a burgeoning partnership between the two nations. South Korea, too, started out looking more like an authoritarian state than a modern democracy just a few short decades ago. Like the South, the challenges North Korea will face cannot be solved in the next year; it is doubtful if they can even be solved in the next decade. However, by taking gradual steps to ensure stronger U.S.-North Korea relations, we are in turn fostering the potential development of a strong strategic partner in East Asia, one that has indicated its unwillingness to serve strictly as China’s puppet in the past.

Amid all of the speculation, one thing has become clear: if America is to engage with North Korea, U.S. foreign policy must shift its focus from denuclearization to a mission of peace-keeping, and long-term stability in the region. Letting go of this opportunity because those in Washington are too strong-headed to understand and work with the valid security concerns of a vulnerable state is foolish, and if the United States does not act now, someone else will.

For now, at least, Trump should start with cutting back on the snarky tweets and getting back to the bargaining table.

Adriana Nazarko is a Summer Research Assistant at the Korea Studies Program at the Center for the National Interest.