Disruption and Realignment Are Necessary for Peace in Korea 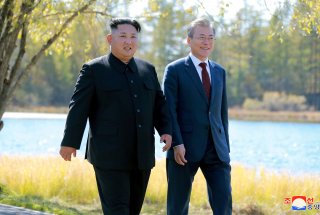 The Korean War had hybrid origins as a civil war, a regional conflict, and a flashpoint in a global bipolar competition. The peninsular, regional, and global dimensions of the confrontation pointed to and reinforced the impulse toward division and military conflict by the summer of 1950. The replacement of the Korean armistice with a stable and permanent peace regime will require that these peninsular, regional, and global factors align so that they form the conditions necessary to achieve peace. At present, it appears unlikely that all three dimensions which contributed to the division of the Korean Peninsula will come into an alignment favorable for peace by 2025.

On the peninsula, the first president of South Korea, Syngman Rhee, and the founder of North Korea, Kim Il-sung, shared conflicting but equally burning passions for Korean unity. The clash of these passions, which were channeled into and magnified by competing ideologies, sparked a fierce competition for legitimacy between rival states that has sustained Korea’s political division to this day. The embers of inter-Korean rivalry continue to burn bright and are fed by North Korea’s recent demolition of inter-Korean relations. Hopes for inter-Korean reconciliation and cooperation generated two years ago by the commencement of North Korean leader Kim Jong-un’s overtures at summit diplomacy have evaporated and will take time to rebuild.

At the regional level, miscalculation driven by the perceived geopolitical and geostrategic value of the Korean Peninsula brought Chinese and American soldiers into direct military conflict during the Korean War. Korea’s division has for decades contributed to regional stability because China and the United States had their own respective spheres of influence on the Korean Peninsula. But rising Sino-U.S. rivalry threatens to subsume and deny the limited common interest Washington and Beijing share in cooperating to achieve North Korea’s denuclearization. Though Sino-U.S. cooperation is a prerequisite for integration and eventual unification of the Korean Peninsula, Washington and Beijing are unlikely, in the current environment, to achieve the level of cooperation necessary to adequately support a transition from armistice to a sustainable and enduring peace on the Korean Peninsula and in Northeast Asia.

Bipolar U.S.-Soviet competition during the Cold War brought the Korean War to center stage as a global flashpoint in 1950, but, after the Korean armistice and subsequent failure of the Geneva Conference to achieve a political resolution in 1954, the Korean conflict then receded from the center of global attention for decades. Now, North Korea’s nuclear and missile development has returned the peninsula to the epicenter of global concern. North Korea’s nuclear expansion renders it a global security concern that can only be overcome through collective action and a deal that guarantees North Korean security in exchange for its disarmament. But the failure of U.S.-North Korea summitry to generate space for political compromise has reinforced the North Korean leadership’s instinct to rely on its nuclear capabilities as its only source of security.

Only a major disruption that shakes up peninsular, regional, and global trend lines will open the way for the end of the Korean conflict by 2025. But the primary source of disruption these days is North Korea, which desires to use its role as disruptor not to end the Korean conflict but rather to enhance its prospects for power and survival. Until this changes, prospects for a sustainable and durable Korean peace remain slim indeed.

Scott A. Snyder is a senior fellow for Korea Studies at the Council on Foreign Relations (CFR) and author of South Korea at the Crossroads: Autonomy and Alliance in an Era of Rival Powers.