Do Americans Even Care About North Korea? 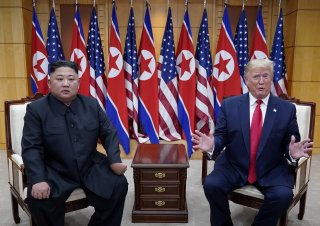 It is unlikely that any serious work will be done to improve US-North Korean relations during the remainder of this year. Having entertained grand hopes for resolving the North Korean nuclear dispute just a few years ago, President Trump must surely now have resigned himself to the fact that no breakthrough with Pyongyang will happen on his watch – at least not in the next six months. Even so, 2020 might yet offer some clues about how the future of this critical bilateral relationship will unfold, with North Korea’s treatment in the US presidential election being of particular importance.

Foreign policy issues never dominate presidential elections. Domestic concerns – the economy, healthcare, and this year the coronavirus pandemic – tend to weigh most heavily in the minds of voters. Insofar as foreign policy intrudes upon electoral politics at all, it is usually so that candidates for office can emphasize certain traits to the voting public. This November, for example, Trump and Joe Biden can be expected to trade barbs over China policy as each man struggles to avoid the criticism of being “weak” on national security.

On its face, North Korea offers several opportunities for both Trump and Joe Biden to place themselves in a favorable light before domestic audiences. Trump could make hay from his diplomatic overtures towards Pyongyang, brandishing his anti-war credentials (such as they are) and styling himself as an earnest man of peace. For his part, Joe Biden could try – indeed, he has already tried – to paint Trump as a coddler of dictators, someone who has jettisoned American values and put US national security at stake. Both candidates could promise to bring a problem-solving mindset to the White House if they were to put forward a detailed plan for the next four years.

All of these are possible ways that North Korea might intrude upon the presidential election. But more likely, North Korea will remain a peripheral issue at best during the November campaign. If the coronavirus pandemic and the economic crisis allow any international issues to see the light of day, it will be China’s rise, Russia’s interference in US democracy, and America’s wars in the Middle East that are the subjects of debate.

The reality is that North Korea just does not resonate in US domestic politics – not its gross human rights abuses (perhaps the worst in the world), not its nuclear program, and not the latent threat that Pyongyang poses to America’s allies and the tens of thousands of US troops based in Northeast Asia. Even if most Americans say that North Korea poses a critical threat to US national security, there is no groundswell of support for action against Pyongyang; and no political leader has managed to mobilize public opinion on North Korea into a force at the ballot box.

At the end of his eight years in office, President Obama called the North Korean nuclear issue America’s “most urgent problem.” But most Americans see things differently. They can (and do) tolerate a nuclear-armed North Korea, and they will not (and do not) punish their leaders for letting this happen. They would surely balk at the normalization of relations with North Korea, but they also want to avoid a worsening of the security situation. In short, Americans can live with the status quo.

This is probably what we will see confirmed during the presidential election and beyond. No candidate will derive any political advantage for proposing radical solutions towards North Korea. They will, instead, be on the safest available ground when hewing to a policy of “muddling through.” In the end, this is what should be expected from both Trump and Biden.