Do Not Forget Korean-Americans With Family Stuck in North Korea 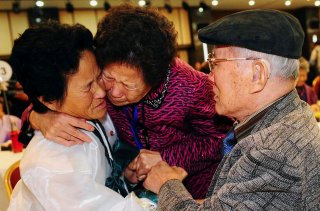 As the Korean War reaches its 70th year and we ponder what the next four of U.S. policy toward North Korea will look like following the upcoming elections in November, one thing is tragically likely: the Korean War will not end before it turns seventy-five. Even if the belligerents were to sign a peace treaty, unless there is a meaningful change from Pyongyang’s authoritarian leadership tactics, the war will have ended in name only.

Millions of Koreans will still be trapped north of the DMZ, living in abject poverty without the human rights which nearly every other country on earth grants its citizens. Millions of Koreans south of the DMZ will still be living within the range of conventional artillery controlled by a regime that has willfully subjected tens of millions of its own citizens to starvation and inhuman suffering in the name of developing nuclear weapons and maintaining a stranglehold over half of the peninsula.

The partition of the Korean Peninsula, the Korean War, and the subsequent isolation of North Korea resulted in the division of up to ten million families. With the passage of this anniversary, it is important to reflect on the still-divided families which have suffered for decades and for whom time is running out.

In the United States, we refer to the conflict as the “Forgotten War” to highlight the largely unrecognized sacrifices of those tens of thousands killed, wounded, and missing American servicemen—to say nothing of the South Korean and U.N. coalition forces who of course also fought to keep half of the peninsula free from tyranny. But the most forgotten group of all are the Korean Americans who have lived in this country without seeing—and in some cases even knowing what happened to—the relatives they had to leave behind in North Korea.

In 2000, there were an estimated 100,000 living Americans with relatives trapped in North Korea. A 2019 estimate places that number at under 100. While more than 44,000 families have been briefly reunited over the years through state-organized reunions in Korea, Americans have never been able to take advantage of that formal mechanism through the South Korean government.

However, there is some small measure of hope. In March, the Divided Families Reunification Act passed the House and is now awaiting a vote in the Senate. This bill has the potential to bring a modicum of relief to Korean American families that have been suffering for generations by calling on the State Department to liaise with the South Korean government and work toward including American families in future reunion efforts. However, the outlook does remain grim as the reunions cannot happen without Pyongyang’s blessing. Deteriorating inter-Korean relations and the coronavirus pandemic have put the reunions on indefinite hold, with the last one occurring in August 2018.

The 70th anniversary of the North Korean invasion south of the 38th parallel also marks seventy painful years since now elderly siblings, spouses, and parents last saw each other. The current status quo’s inertia suggests that North and South Korea can remain divided far beyond anniversaries and longer than the average life expectancies on the peninsula, but the aging members of divided families cannot. When November’s winner leaves the White House in four or eight years, it is possible that there will be no Americans with divided families still alive. If negotiations between Washington and Pyongyang do resume, don’t forget the handful of Americans simply praying that they’ll be able to see their families one last time.