Does North Korea Want to Absorb South Korea or Just Leach Off of It? 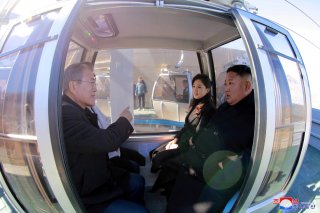 On the fringes of the Korea policy debate, there has long been speculation on what North Korea’s final peninsular goals might be. I say “on the fringes,” because North Korea has clearly lost the inter-Korean competition, South Korean-led unification is far more likely, and issues like the North’s unchecked nuclear missile development, border provocations, openness to negotiations, or possible implosion garner far more attention. South Korea is stable and wealthy, has a modern, capable military, and is allied to the United States, so Northern-led unification at this point is extremely unlikely. Indeed, it has not really been in the cards since the 1970s.

Nonetheless, it is a relevant debate because it sheds light on what North Korea might pursue in serious negotiations over the final status of the peninsula, and whether the North might take genuine strategic risks against South Korea—those which might escalate into serious conflict. Here is a good take that the North indeed pursues “final victory.” But there are reasons why Pyongyang might not.

First, talk is cheap. Both Koreas do indeed talk tough on unification. Both are constitutionally committed to unification on their own terms. Both countries claim to be the sole legitimate authority over the entire Korean Peninsula. This is, of course, reminiscent of other Cold War-divided countries, but like Germany in the 1970s and 1980s, the division between the two has slowly settled in and become a status quo each has learned to live with.

This is obviously not ideal. Neither likes it. Both would rather win. But any serious move to eliminate the other would likely be very costly, so both are satisficing. They have accommodated a good enough outcome. Despite the de jure revisionism in their constitutions and proclamations, both Koreas are now de facto status quo states. They are not acting on their beliefs at the risk of any meaningful costs.

For example, North Korea has long since abandoned its efforts at domestic subversion and terrorism in South Korea. It continues to provoke along the border, but these are limited actions and occur only under conservative South Korean presidents. This strongly suggests they are demands for a South Korean policy change or just a pay-off.

In 2010, the North did sink a South Korean navy vessel in an action that might well have spun out of control, but that appears to have been a one-off. It is unlikely that North Korean missile-building desires could lead to unity on its terms. Nuclear weapons states have all found that nukes work well for deterrence but not well for offense.

Second, tough talk on unification serves North Korea’s domestic ideological needs. North Korea’s ideology is nationalism now, not Marxism or communism. So even if it is mostly resigned to the status quo, there is domestic value in continuing the drumbeat of belligerence. If the wealthier, healthier, more successful South is not the “Yankee Colony” that must be liberated, then there is no reason for the stand-off to persist, no reason for North Korea to exist anymore.

When East Germany gave up on socialism and opposition to West Germany after the opening of the Berlin Wall, it disappeared less than a year later. North Korea’s elites fear such an outcome, of course. Not only would they lose their very plush privileges, but they would likely face prosecution in a truth-and-reconciliation process. So, the empty rhetoric still has value.

Third, North Korea probably could not absorb South Korea without a major crisis back home. At some point, realism must confront even the most blinkered regime ideologue. South Korea would be very hard to conquer. Its military is substantially more advanced. It is allied to the United States. Korea is very narrow with little room to fight a war of maneuver, so allied air power would exact a high price. If the North used battlefield nuclear weapons to compensate for its conventional disadvantage, then it might face a U.S. nuclear response. This likely tempers all but the most ferocious dogmatists of the North.

Also, North Korea’s internal segregation, songbun system would likely be overwhelmed by the inclusion of fifty-two million Southerners at a stroke. That would triple the size of the population under Pyongyang’s control, and almost all of those Southerners would be classified into the bottom, hostile songbun tier. That would be massively expensive and alienate most of these recently conquered people. Accustomed to personal freedoms, these former South Koreans would also likely revolt, creating a hugely expensive occupation requirement for the North Korean army. Additionally, the wealth of South Korea would almost certainly corrupt North Korean officers stationed long-term there in this occupation.

Fourth, conquering/absorbing South Korea ruins its value. The South is a trading state which generates its wealth from its connections to the global economy. Severing those connections would kill the golden goose and burden yet further North Korea’s grossly inefficient economy.

Fifth, South Korea could simply pay North Korea’s bills, which is a pretty good satisficing outcome for the North. South Korea’s liberal governments have long sought a federation with the North, and current dovish President Moon Jae-In has talked this way too. This would likely mean an inter-Korean covering federation, but one so thin that would not impact the North’s domestic governance much (otherwise the North would never agree to it). But it would almost certainly mean South Korean financial transfers to the North. For the gangsterish North Korean elite, that is a pretty good outcome. Just take the money and run, while not taking any really strategic chances with major downside risks.

In the end, the core issue, I believe, is whether the ruling Kim family of North Korea are 1) genuinely committed nationalist ideologues willing to take real strategic risks to promote absorption, or 2) just a mafia clan looking to maintain their privileged lifestyle and power, and grab some low-risk cash along the way. I think it is the latter.