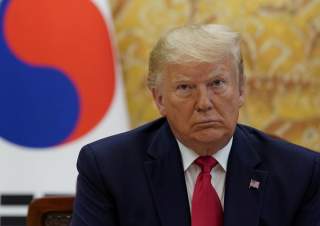 President Donald Trump is demanding an immediate five-fold increase in South Korea’s annual reimbursement for the cost of stationing U.S. troops overseas, with all signs pointing to a similar demand coming on Japan. Through successive administrations, the U.S. has long sought greater allied compensatory costs and involvement in overseas operations.

However, such exorbitant demands overlook not only the key contributions already made by both allies but the fact that our alliances are all about shared interests. Trump should adopt an incremental approach to address his concerns with cost—one that can also maintain allied cohesion. At a time when Pyongyang is rejecting a diplomatic resolution to the nuclear crisis and threatening to take more dire actions by year’s end, the need for a careful approach could not be more evident.

The Importance of U.S. Forces Overseas

Attaining and defending American national interests in Asia requires U.S. bases and access, sufficient forward-deployed military forces to deter aggression, robust follow-on forces, and strong alliances and security relationships with South Korea, Japan and other countries in that part of the world. The U.S. military presence in Asia is also an indisputable signal of Washington’s commitment to defend its allies and maintain peace and stability in the region.

The Trump administration has made a point of urging allies to contribute “an equitable share to our mutually beneficial collective security,” including providing more for the upkeep of U.S. forces deployed overseas. But all allies are not the same. South Korea and Japan should be recognized for their significant contributions.

South Korea spends 2.6 percent of its gross domestic product on defense, more than any European ally. During the last four years, South Korea purchased $13 billion in arms from the United States. By 2022, South Korea will be the fifth-highest or sixth-highest spender in the world on defense.

South Korea has also been a stalwart ally beyond its shores. Seoul sent three hundred thousand troops to the Vietnam War and conducted anti-piracy operations off Somalia, as well as numerous peacekeeping operations, including in Iraq and Afghanistan. Japan, for reasons associated with its constitution, which the United States was instrumental in shaping, does not spend as much as a percentage of GDP as South Korea. But it is a larger economy, and in dollar terms, it spends more.

For years, Washington consistently said that the annual cost of stationing U.S. forces in South Korea is approximately $1.5 billion. South Korea now pays $920 million. Additionally, South Korea absorbs costs not covered in the cost-sharing agreement, including paying $10 billion, or 93 percent, of the cost of constructing Camp Humphreys, the largest U.S. base on foreign soil.

Japan covers approximately 75 percent of the cost of deployed U.S. forces as well as nearly all of the construction costs of new large U.S. facilities at Futenma and Iwakuni, and one-third of the cost of new Marine Corps facilities in Guam. Tokyo also purchases 90 percent of its defense equipment from the United States, including F-35 jets and V-22 Osprey aircraft.

This year, U.S. negotiators are demanding that Seoul pay a five-fold increase of $5 billion annually. Such an amount would be 11% of South Korea’s entire annual defense budget of $42 billion. Seeking to profit off U.S. forces overseas is inconsistent with American values and commitments. It is a break from U.S. post–World War II policy.

In South Korea, Strong Support for the Alliance but Not Price Hike

Eighty percent of South Koreans have a positive view of the United States, and 91 percent support a U.S. troop presence in South Korea. But 96 percent oppose Trump’s demand for significantly increasing Seoul’s share of the cost for U.S. troops in their country. South Korea’s conservative media, usually a stalwart defender of the alliance, has become increasingly critical of the U.S. approach. Conservative legislators in Seoul privately warn that the U.S. demand—not only the exorbitant number but the way it is being done—could trigger a resurgence of anti-Americanism.

Both sides deny U.S. troop levels are on the table, but the U.S. break-off of negotiations raises concerns that an unresolved dispute could lead either Washington or Seoul to advocate a reduction of U.S. forces in South Korea. Doing so would be counter to strong public U.S. support for its South Korean ally. Sixty-nine percent of Americans polled advocated maintaining or increasing U.S. troops in South Korea, and 58 percent support using force to defend Seoul in a serious conflict with North Korea.

Reducing U.S. forces deployed overseas would: make America weaker on the world stage; drive a wedge between Washington and its allies in Asia and Europe; risk triggering stronger actions by North Korea, China, and Russia; and exacerbate already growing concerns in Seoul and Tokyo about the continued viability of the United States as an ally.

The Trump administration’s National Security Strategy states: “U.S. allies are critical to responding to mutual threats, such as North Korea, and preserving our mutual interests in the Indo-Pacific region.” That’s 100 percent correct.

A Heritage vice president, James Jay Carafano is responsible for the think tank’s research on matters of national security and foreign policy.

Walter Lohman is the director of Heritage’s Asian Studies Center.