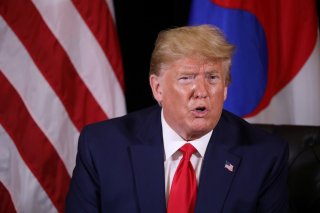 With cost-sharing talks hitting a wall, President Trump searching for a foreign policy win he can use during an election year and the South Korean government constantly wondering about Trump’s personal dedication to the U.S.-South Korea alliance, the Joint Staff at the Pentagon has presented the White House with troop withdrawal options for South Korea.

As reported by the Wall Street Journal on July 17, the force reduction review comes at a time when the U.S.-South Korea relationship is looser than iron-clad and after President Trump rejected a South Korean proposal that would have bounded Seoul to funding the U.S. military presence to the tune of $5 billion over five years.

To Korea watchers in Washington and Seoul, the latest report is standard-fare.

We have been here on many occasions over the last three years. Many of us have known for quite some time that Trump isn’t a fan of the 28,000-strong U.S. troop presence in South Korea, which he considers to be a waste of money and an antiquated U.S. security commitment.

In fact, Trump’s tough line on South Korea goes back at least 30 years, when he complained to Playboy magazine that the South Koreans (and the Japanese) were ripping the United States off and playing Uncle Sam for a sucker.

Inside U.S. foreign policy circles, the U.S.-South Korea alliance is sacrosanct and is not to be trifled with. Listening to Trump, who has never been a member of that circle, the U.S. military is doing for South Korea what the South Korean military should be doing for themselves.

To be fair, Trump's grouchiness with South Korea makes some amount of sense. With a $1.6 trillion GDP, South Korea is one of the most wealthy and productive nations in Asia. Seoul’s economy has increased by more than 10% between 2015 and 2019 (the numbers would have been more impressive if 2019 wasn’t such a difficult year). One can certainly make the case that South Korea should pony up if it wants thousands of U.S. troops to stay. There is nothing wrong with demanding, and indeed expecting, a host-nation to contribute more of the underlying costs, especially if the deployment is designed to be long-term (for the record: the Trump administration’s initial $5 billion demand was a joke).

Cost-sharing, however, is a different concept than burden-sharing. It’s one thing for South Korea to pay more of the tab for feeding U.S. troops or maintaining the buildings, bases, and other facilities required to house them. It’s quite another to ask the South Korean military to embrace more of the responsibility associated with actually defending South Korea from all threats, foreign and domestic. The first pays Washington for its trouble, like any other transaction. The second is far more beneficial for the U.S. and South Korea over the long-term.

In fact, it’s a bit strange why Trump is so focused on Seoul. Compared to other countries in Europe or the Middle East, South Korea is a model security partner. Germany, for example, has spent about $1 billion over the last decade on sustaining the U.S. troop presence on German soil. The Moon administration spent over $920 million for the same purpose last year alone. If the president is looking to get more bang for America's buck, he ought to be looking at Washington’s NATO allies, the majority of which may not even reach the 2% of GDP defense spending benchmark the alliance agreed to uphold by 2024.

Nor is South Korea a stickler when it comes to defense expenditures. South Korean President Moon Jae-in may consider himself a pacifist and a peacemaker, but that hasn’t stopped him from pouring more money into the South Korean military and spreading it across all of its branches. Seoul will soon be jam-packed with F-35 joint strike aircraft. The Moon administration is investing more in anti-access and area-denial capability, including sensors and some of the most sophisticated intelligence, surveillance and reconnaissance equipment a nation can purchase. Devoting an additional $239 billion in defense spending over the next five years is not chump change.

Many people will read the Wall Street Journal story about the deliberations over a possible U.S. troop reduction in South Korea and pull their hair out as if the decision is imminent. Lawmakers in both parties are likely to file a few amendments to the National Defense Authorization Act that would prohibit the use of funds to decrease U.S. force levels in South Korea below a certain quota. If there is one thing Capital Hill can agree on, it’s preventing troop withdrawals anywhere, at all times.

Even so, let's not forget the big picture: as important as it is to not get fleeced, the debate over cost-sharing is a distraction. It’s burden-sharing we should be keeping our eyes on.