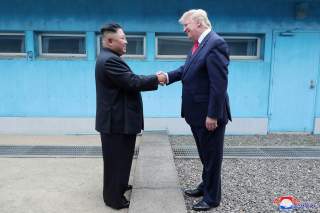 A February 10 CNN report cites two unnamed U.S. officials stating that President Donald Trump has largely written off direct negotiations with Kim Jong-un this year. The sources describe a president who is frustrated with where the diplomatic process is and antsy about doing anything that could remotely throw a wrench into his re-election prospects. A man who was once so eager to meet with Kim that he bucked the advice of his national security advisers is now lethargic about the entire thing. Trump now looks at the North Korea portfolio and sees nothing but trouble, an issue to avoid until after he wins a second term (assuming, of course, he can pull it off). With the exception of a short, vague, non-binding, glossy press release between Trump and Kim that pushes details to a later date, Trump’s diplomatic gamble with the North is resting on a wobbly foundation.

As one U.S. official told CNN, negotiations are “dead.” One can't think of another word more depressing in the annals of diplomacy.

For one, the domestic political calendar in the United States militates against a resumption of bilateral diplomacy with the North. The Trump administration spent the last four months preoccupied with an impeachment fight that resembled a sloppy, drunken bar-room brawl between America’s two major political parties. The impeachment saga may be over, but a new saga called the 2020 presidential campaign is well past the starting gates. Trump will spend the next 10 months solely focused on staying in the White House, traveling the country donning a red “Keep America Great” cap, firing up his legion of hard-core supporters, and making fun of his Democratic rivals on the campaign trail as socialist misfits who will turn America into the Soviet Union. His mind is running on a single-dimension: re-election. Everything else, including diplomacy with Pyongyang, will be a distant second.

Two, the depressing reality is that nuclear talks with the North haven’t been going anywhere for awhile now. Discussions have never recuperated from the Hanoi summit a year ago, when Trump and Kim flew back home empty-handed after misreading one another. Kim is clearly past the irritation stage; a significant portion of his speech to the Workers Party plenum last December was a long, grievance-filled tirade against Washington’s behavior. Trump may still put on a happy face about the personal relationship with Kim, but the North Korean leader may no longer have any confidence in the president’s intentions, let alone his ability to deliver. Kim’s subordinates have been even harsher in their language. In the words of Vice Foreign Minister Kim Kye Gwan, “We have wasted our time with U.S. for more than a year and a half.” Apparently, Trump feels the same way.

Finally, never underestimate the power of the status quo. Despite the unconventionality unleashed by Trump over the past three years, U.S.-North Korea relations are still operating on the same, old paradigm. For Pyongyang, denuclearization is a non-starter unless the United States provides the political, economic, and security concessions required to kick-start a new era of bilateral relations. For Washington, these concessions are simply not on the table unless the North takes substantial steps to eliminate its warheads, open up every square inch of the country to international inspectors, and indeed trade away its biological and chemical weapons and long-range missile systems. There is an over-abiding sense in both capitals that one is trying to mischievously stab the other in the back. Old habits die hard.

Sound sad? It certainly does. Unfortunately, the story could always get sadder.