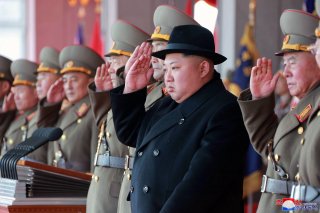 When dealing with North Korea the Republic of Korea is like a lovelorn teenager. Infatuated with someone slightly exotic but distant, desperately trying to attract, even impress someone who rarely responds, and even then usually scornfully. However, an occasional flicker of recognition overwhelms prior rejection and rekindles hope. And the process repeats. Again and again.

Something much like this is going on between the Koreas today.

Donald Trump’s 2018 summit with the North’s Supreme Leader Kim Jong-un raised the possibility of ending the peninsula’s unique cold war and denuclearizing the North. Although an obvious longshot, this vision captured the imagination of South Korean President Moon Jae-in. He joined fellow progressive presidents Kim Dae-jung and Roh Moo-hyun in venturing to Pyongyang to see North Korea’s leader, as well as twice meeting Kim at Panmunjom.

After the failure of the Hanoi summit between Kim and President Donald Trump the North essentially cut contact with the ROK as well as the U.S. All that Seoul then received from the Democratic People’s Republic of Korea was a torrent of insults and threats, just like in the past. Moon then played the teen filled with unrequited love, with inevitably tragic results. Last year Pyongyang emphasized its rejection by destroying the liaison office building constructed by Seoul and turning Kim’s sister, Kim Yo-jong, into a regime attack dog against Moon, making the insults personal.

However, late last month the DPRK restored the bilateral hotline, following an exchange of letters between the two leaders. North Korea sounded almost enthusiastic when its Korean Central News Agency explained: “The top leaders of the North and the South agreed to make a big stride in recovering the mutual trust and promoting reconciliation by restoring the cutoff inter-Korean communication liaison lines through the recent several exchanges of personal letters.”

Which set off fevered talk in Seoul about the possibility of renewed negotiations over disarmament and détente—aided by a new video conference system—and even the possibility of a summit. Ever hopeful South Korean progressives imagined North Korean talks with America as well. In June Kim told the Workers’ Party of Korea to be ready for confrontation or dialogue. ROK optimists that this meant Kim saw the benefits of engagement and was prepared to proceed.

Then Kim Yo-jong made another appearance. She spoke as a scornful love interest, dashing the hope that the renewed hotline meant something more: “those inside and outside south Korea are freely interpreting its meaning their own way and there is even a public opinion about the issue of the north-south summit. I think it is a premature hasty judgment. What I think is that the restoration of the communication liaison lines should not be taken as anything more than just the physical reconnection. Hasty speculation and groundless interpretation will only bring despair, instead.”

But that wasn’t all. It naturally was Seoul’s fault that bilateral relations were poor: The South was preparing to hold joint military exercises with the U.S. Complained Kim Yo-jong: “I view this as an undesirable prelude which seriously undermines the will of the top leaders of the north and the south wishing to see a step taken toward restoring mutual trust and which further beclouds the way ahead of the north-south relations. Our government and army will closely follow whether the south Korean side stages hostile war exercises in August or makes other bold decision. Hope or despair? Choice is not made by us.”

Things look bad. But if only someone would make a “bold decision,” namely end the exercises, then all would be well. The Lady Kim promises.

Pyongyang long has sought to convince the U.S. and South Korea to end the annual maneuvers. It was a fair ask when the DPRK suspended nuclear and ICBM tests. However, demanding the concession to simply talk again—playing on lovelorn Seoul’s desperate desire to hook up with its imagined North Korean sweetheart—is no bargain.

Moon and his progressive allies, such as Democratic Party head Song Young-gil, who argued that the ROK and U.S. should offer humanitarian aid and support the reopening of the Kaesong Industrial Complex, would sacrifice their leverage simply to get the North back to the table. And then what more would have to be offered to win Pyongyang’s assent to an actual agreement?

Kim Ki-jung, president of the Institute for National Security Strategy, argued: “When we consider what’s happening on the Korean Peninsula, now is the right time to take actions toward engaging North Korea. They are reaching out to Washington through Seoul.” That may be so, but only because they clearly see South Korean progressives, who may lose the presidency next year, as a soft touch.

The latter are right about the need to be prepared to negotiate. But facing an adversary as ruthless and calculating as the North, Moon should abandon the artless ways of the lovelorn and learn the art of not being over-eager. The South and U.S. should indicate a willingness to talk at any time, but concessions should be reserved as rewards for corresponding DPRK promises, backed by actions.

Indeed, though Kim seemed serious about making a deal with the Trump administration, his attitude today appears very different. After the failed Hanoi summit the regime cut diplomatic contact with the U.S. as well as the ROK. Kim reversed many of the modest economic reforms previously implemented. Moreover, he recently embarked upon a brutal crackdown on South Korean culture which has proved far more attractive to North Korea’s young, especially, than faux tales of communist principle and dynastic perfection amid famine and poverty. The COVID-19 pandemic provided an opportunity to keep out foreign influences as well as threatening infections.

Perhaps the Supreme Leader is prepared to reverse course again, but it seems just as likely that he has decided to accept public poverty as the price of nuclearized isolation. He may believe nukes are necessary for his survival and Washington will always ask for too much to lift sanctions. He may have concluded that increased foreign contacts accompanying any deal reached with the U.S. and South Korea would threaten the North Korean system and his dynasty. Or he may have lost or never had full control in the North, and hardline factions are now ascendant. If any of these is true, preemptive concessions to simply start a conversation would come to naught.

Moon Jae-in deserves credit for having pushed so assiduously to bring the North into civilized international society, such as it is. However, to have any chance of success he must accept the possibility, even probability, of failure. He should encourage Kim to restart talks with the U.S. and ROK. But to do so with a positive result, rather than a preemptive concession, as the reward. It is time for the lovelorn teen to begin acting like a more experienced, even cynical adult.