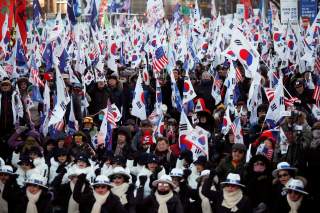 As 2018 dawned few expected that for North Korea it would become the year of summits, and expressions of love from President Donald Trump. Who knows what 2019 will bring?

Pyongyang will not give up its nuclear weapons. That is unlikely in the long-term. It is inconceivable in the short-term. Indeed, Kim Jong-un and his officials all have made their position clear. First must come an improved relationship with the United States. Second must come a peace regime for the Koreas. Only third is denuclearization.

Even then it seems unlikely that the North will disarm. Furthermore, given lack of knowledge about the extent of Pyongyang’s arsenal, America might never know if the Democratic People’s Republic of Korea has done so. However, if the Trump administration ignores the North’s explicit conditions, significant progress is unlikely.

If North Korea does not rush forward with at least some of its nukes, the president is likely to grow frustrated and impatient. His political interest is to declare victory, but that will be difficult to maintain absent meaningful progress. So he may see a return to toughness as a way to demonstrate his “leadership.” If so, the bilateral relationship could go bad very quickly.

Tension between the United States and the Republic of Korea is likely. Seoul sees the administration as blocking reconciliation, which it sees as necessary to move ahead with denuclearization. Moreover, Washington’s demand for increased host nation support revives concerns over the president’s dismissal of the importance of the alliance. Although the Moon government does not want the United States to interfere with improving inter-Korean relations, it still desires the backstop of an American security guarantee.

If Washington moves back toward the ill will which dominated 2017, the South is likely to find itself attempting to conciliate Washington and Pyongyang. For South Korea reconciliation is an existential issue, at least alongside denuclearization in importance. America cares mostly for the latter, seeing the former more as a means to an end.

Even with a breakdown of the Trump-Kim relationship, war remains unlikely. Washington would find a united front against military action: South Korea, Japan, Canada, and Russia all would be at some degree of risk. Moreover, so far President Trump has proved to carry, not use, a big stick. A war with potentially tens of thousands or more U.S. casualties probably would not be good for his reelection hopes.

Perhaps only one thing can be said with certainty: the Korean peninsula is likely to remain unsettled and interesting. Fasten your geopolitical seat belts.