The End of the Road for Trump’s North Korea Strategy 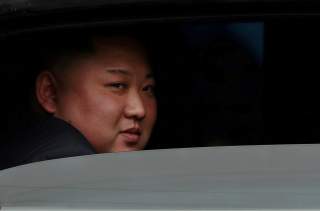 Whether unintentionally or by design, Trump landed on a seemingly practical strategy towards North Korea in early 2018. By emphasizing the growing personal relationship between himself and Kim Jong-un, he was able to de-escalate the sky-rocketing tensions that had characterized American-North Korean relations throughout 2017 (which, to be fair, he had helped to fuel). Yet, by simultaneously downplaying the need for a formal and systematic arrangement on exchanging sanction reductions for disarmament, he sidestepped the transparency and accountability problems that scuttled previous such schemes.

Despite initially appearing to have backed Trump into a corner at the end of 2017 (where he could either meet with Kim as offered and get cheated or refuse to talk and look the warmonger) therefore, Kim was subsequently wrong-footed over much of the next two years. He did get to sit down with Trump on several occasions, with much fanfare and excitement, but failed to show anything meaningful for it. While he clearly never intended to really deliver on disarmament, Kim probably did expect his vague promises to obtain at least a temporary reprieve from the stringent American-led embargo that is still squeezing North Korea today. This is something that Kim urgently needs because sanctions are beginning to bite at the military and political elites at home that he depends upon to keep propping up his totalitarian regime.

Part of why Kim lost out is that he misinterpreted his rosy meetings and exchanges of “beautiful” letters with Trump as evidence that the United States would treat North Korea with a velvet glove in the future. This is a mistake that many other world leaders, including Xi Jinping, Emmanuel Macron, and Abe Shinzō have made in the past. Even after negligible progress was made after the first two summits, Kim seems to have been fooled into believing that further meetings would bring about substantive results. When Trump tweeted at the last minute that he would like for Kim to trek out to the North Korean border for a handshake when Trump was visiting South Korea in June this year, Kim promptly jumped to obey. Once again, however, nothing meaningful was achieved.

Until recently then, Trump’s strategy appears to have fared pretty well. American-North Korean tensions were reduced and Kim temporarily scaled back the development of his nuclear weapons program, all for little to no cost. This is no mean feat given that many of the alternatives that could have happened were considerably worse. Trump was not suckered into signing a bad deal in which the United States reduced sanctions in exchange for meaningless promises about disarmament that Kim never intended to keep. Nor was he goaded into launching military strikes that might have escalated into a nuclear conflict.

Yet, to a large extent, Trump’s strategy has represented nothing more than an elaborate stalling for time and this approach is now reaching the end of its utility. New insults,  threats, and tests from North Korea show that Kim is increasingly unwilling to settle for just a cordial friendship and reciprocal expressions of affection. He desperately needs something more concrete to show back home and is beginning to realize that his chummy meetings with Trump have neither delivered the tangible concessions he needs nor are they ever likely to do so.

Kim recently promised a Christmas gift to the United States to signal his growing frustration about being stiffed and to signal that he will no longer accept platitudes in lieu of sanction reductions. Trump would be foolish to respond with either concessions or military strikes because these two pathways remain just as foolhardy and dangerous as in the past. The net result is that, come the New Year, Trump will need to find and pursue a markedly new strategy towards the North Korean problem. With Kim raising the nuclear stakes once more, Trump may need to do so very quickly indeed.

Francis Grice is an Assistant Professor of Political Science and International Studies at McDaniel College in Maryland. He has a Ph.D. in Defence Studies from King’s College London (2014) and specializes in Asian Security Studies and International Relations. His most recent book, The Myth of Mao Zedong and Modern Insurgency, was published in 2018.