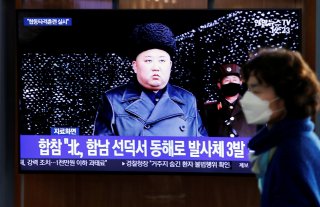 Editor’s Note: As the world commemorates the seventieth anniversary of the start of the Korean War, the Center for the National Interest’s Korean Studies team decided to ask dozens of the world’s top experts a simple question: Do you believe that the Korean War will finally come to an end before its next major anniversary in 2025? The below piece is an answer to that question. Please click here to see even more perspectives on this important topic

But a declaration of an end to the war based on political expediency and naïve conceptions of peace between the two Koreas isn’t going to result in real peace. The reason why a Cold War persists on the peninsula is because of the continuing threat emanating from North Korea—the world’s only communist dynasty. Armed with nuclear weapons since 2006 and with accelerating nuclear and ballistic missile capabilities, North Korea under Kim Jong-un has hardly relaxed tensions with South Korea.

Leaving aside recent antics such as blowing up the South-North liaison office, Kim has given absolutely no indication that he is willing to negotiate away his nuclear weapons. President Donald Trump’s attempts to brush the North Korean nuclear threat under successive Tweets have failed dismally. His comical attempts to convince Kim to denuclearize such as asking Secretary of State Michael Pompeo to deliver Elton John’s “Rocket Man” CD as a sign of Trump’s friendship isn’t funny but outright dangerous. Under Trump’s watch, North Korea’s nuclear weapons program has accelerated. Trump’s chaotic, ill-prepared, and, yes, even childish attempts to reach a “deal of the century” with the head of the world’s most totalitarian regime has dialed back the clock for genuine peace on the Korean Peninsula.

Putting into place a verifiable denuclearization roadmap; strengthening deterrence and defense vis-à-vis North Korea; revamping the alliance to meet new political conditions in South Korea and the United States; maintaining the unity of effort between the United States, South Korea, and Japan; and responding effectively to China’s increasingly robust power-projection capabilities are all critical prerequisites to making lasting peace on the Korean Peninsula.

What many forget is the undeniable report card of the two Koreas that has been placed in front of the world sixty-seven years since the end of the Korean War in 1953. As the famous satellite image reminds us, North Korea is shrouded in near-complete darkness whereas South Korea is ablaze with light from its megacities. A third-generation Kim rules North Korea with an iron fist. Kim and his family run North Korea like their own backyard, but a backyard packed with nuclear weapons, 1.2 million soldiers, and an archipelago of gulags. The Kims live like billionaires while the vast majority of their countrymen live in poverty. South Korea is the complete opposite of North Korea.

A just, enduring peace is possible on the Korean Peninsula, but it’s not going to happen just because political leaders decide to formally end the Korean conflict. It will happen only when twenty-five million North Koreans can live as free men and women and not as prisoners in the world’s biggest jail. This message is the abiding lesson from the Korean War and the reason why so many gave their lives in the defense of freedom and liberty.