Enough Photo-Op Summits: Is There a Deal with North Korea or Not? 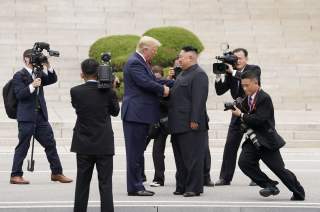 Recently, U.S. President Donald Trump held his third summit with North Korean supreme leader Kim Jong-un. The meeting took place at Panmunjom in the demilitarized zone (DMZ), the de facto border between the two Koreas. At this point, we have yet to see any substantive movement on the issues which divide America and South Korea from North Korea. Once again, it appears that a Trump-Kim summit was mostly overtaken by the optics and staging.

Trump is a master of media coverage and arguably media manipulation. He has a powerful gut instinct for what makes great drama on television. He used Twitter to suggest Kim come to meet him, and Twitter is a platform heavily used by journalists. Trump grasped the drama of a grand, last-minute gesture against portentous backdrop: he would meet Kim at the DMZ no less and maybe step into North Korea, being the first sitting U.S. president to do so. So the media spent several days endlessly debating the proposal, wondering if Kim would come, wondering if Trump would step over the border. Trump got around the clock wall-to-wall coverage.

Nor was it a coincidence that Trump’s North Korea hijinks drowned out coverage of the Democratic presidential debate. Just as Trump overwhelmed his Republican primary opponents in 2016 by generating endless media stories about himself, so he pushed aside the big Democratic coming out moment with his own well-orchestrated media stunt. The Democrats will have to contend with this sort of attention-grabbing behavior for the next eighteen months, and it does not appear that they know how to respond.

So it was great TV. But it was not great diplomacy. Once again, Trump showed up to a summit with Kim with no preparation. Once again, the summit was thrown together at the last minute. Once again, the president “winged it.” Once again, no concrete specifics came of it. Once again, there was a carnival atmosphere, rather than a professional one in which Trump came ready to seriously give-and-take with Kim. If the analyst community was nearly monolithic in describing this summit as a media gimmick, there was a good reason. We are still no further along on the core issues than when this all started in March 2018 when Trump agreed to meet Kim for the first time. This has now become a curious waiting game, punctuated by occasional media hyperbole that such-and-such meeting was “historic,” “epochal” and so on.

At this point, it is legitimate to ask when we will get to the actual negotiations over what the two sides will swap. With Trump’s invitation of Kim to the White House, it looks like that moment will again be pushed into the future. A White House visit would be an even greater media bonanza than the previous three summits. The media coverage would likely last a week, drowning out all campaign news, focusing questions of war and peace once again on Trump’s person. The sheer campaign reelection value of such an event would be extraordinary, so Trump probably has little interest in actually wrapping this up promptly. The North Korea process has become a useful, quick go-to media tool for him.

Kim similarly has powerful incentives to drag his feet. It is widely suspected that Kim prefers bargaining directly with Trump over having U.S. and North Korean working groups hammer away at the details. Trump is clearly anxious for a deal; he told Japanese Prime Minister Shinzo Abe to nominate him for a Nobel Peace Prize. But the hawks around Trump—most obviously National Security Advisor John Bolton and Secretary of State Mike Pompeo—want to push the North much harder. This is probably why last year’s negotiations after the initial Singapore summit failed.

Direct Kim-Trump talks also generate a propaganda bonus for Pyongyang—lots of imagery of its Orwellian dictator being treated like a world statesman by the leader of the global superpower. So expect any working groups this year to stumble along, just as they did last year, with Kim waiting for election pressures and the dramatic White House visit to give him more leverage over Trump.

In short, it will likely be an erratic process of another six months or a year, with no real deal, plus a lot of should-they-or-shouldn’t-they punditry about a White House visit.

Unfortunately, none of this gets to the core issues, which at this point, are the following:

1. Will North Korea give up any nuclear warheads and/or missiles at all?

3. Will North Korea submit to an inspection regime?

4. For these major concessions, will the U.S. offer commensurate counter-concessions? (Washington has not to date.)

6. Will Congressional Republicans, who undercut both President Bill Clinton’s 1990s deal with North Korea and President Barack Obama’s recent deal with Iran, suddenly accept a new North Korea deal which will almost certainly leave much of its nuclear arsenal intact?

7. Will the North Koreans believe any deal with Trump given, a) Trump’s long history of contract violation in his business career and personal life, and b) America’s cheating on the recent nuclear deals with Libya and Iran?

None of the Trump-Kim get-togethers have resolved, or even really raised, these hard questions, and after three photo-op summits, people are rightfully skeptical a White House event will either. America is adrift now.