Even If Kim Jong-Un Died, We Should Expect North Korea to Keep the Same Policies—for Now 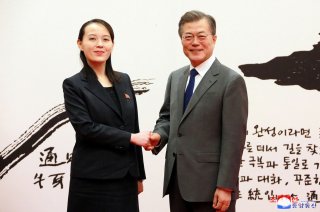 If North Korea’s leader Kim Jong-un were to suddenly die, there are two options, really. Either the transfer of power to another member of the Kim family (and/or a trusted member of the regime) goes smoothly... or it doesn’t.

The former is more likely since it’s in the interest of the country’s ruling elite to keep the Kim regime in place, as they’ve spent the last three-quarters of a century placing the Kim family at the center of the nation’s mythology. It is also in their interest given the patronage networks that have been established. It is rumored that Kim Jong-un is the father of small children who could someday take his place as the country’s leader. In the meantime, it is much more likely that the right to rule falls to his sister, Kim Yo-jong, who has been rising in political prominence (and visibility) in recent years. Whether she keeps that power for herself, in concert with other members of the country’s elite, or until Kim’s kids are of age to assume leadership remains to be seen. It’s always difficult to predict the politics of a country as opaque as North Korea, but the smart money is on policy continuity, at least in the short term; any new leader would be disinclined to create any unnecessary political upheaval by supporting sudden and radical policy changes.

But it’s also possible something goes wrong with the attempt to transfer power; key people don’t prove up to the task, or someone else thinks they can do a better job of ruling the country and are willing to risk their privileged position to prove it. Then the world finds itself with a failed state on its hands—and one with nuclear weapons.

Should that come to pass, America should have three clear and distinct priorities. First, to track down and secure any nuclear weapons that may be suddenly in play. The second is to make sure that the inevitable unrest in North Korea’s military and broader society doesn’t result in waves of North Korean refugees flowing into neighboring countries. Third—and much less of a pressing priority for the international community—is building the country of North Korea back up again. Expect China to take the de facto lead on all these efforts given its military dominance in the region and historic ties to the country; whether the United States (and the rest of its allies in Asia) are heartened or threatened by that fact will go a long way to shaping the next phase of the U.S.-China rivalry.

Ian Bremmer is president and founder of Eurasia Group, the world's leading political risk research and consulting firm, and GZERO Media, a company dedicated to providing intelligent and engaging coverage of international affairs. His most recent book is the New York Times bestseller “Us vs. Them: The Failure of Globalism.”