Even With Omicron, North Korea Still Claims No Coronavirus Cases 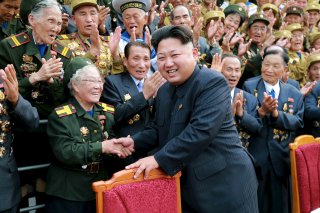 Throughout the entire coronavirus pandemic, North Korea has continued to insist that has had no cases of the deadly virus. This was the case through the original emergence of the virus, through various earlier variants, and now the arrival of Omicron.

Sure, no one in the public health or diplomatic worlds believes the regime in these claims, but they have continued to make them despite the country’s close proximity to the pandemic’s initial epicenter of China.

Back in November, a UN panel passed a resolution criticizing North Korea for its human rights abuses.

“The urgency and importance of the issue of international abductions, which involves a serious violation of human rights, and of the immediate return of all abductees,” said the resolution, which was backed by Japan and the European Union. The General Assembly, according to Kyodo, is likely to pass the resolution later this month.

Also mentioned in the resolution is “grave concern at the long years of severe suffering experienced by abductees and their families, and the lack of any concrete or positive action,” as well as a denunciation of North Korea’s pursuit of nuclear weapons.

“We will never tolerate any attempts that violate the sovereignty of our state and we will continue to resolutely counter to the end the ever-worsening moves of the hostile forces against us,” the North Korean foreign ministry said in a statement issued by the Korean Central News Agency.

This comes as North Korea marks Kim Jong-un’s tenth anniversary in power this month, as Kim has ruled the country since the passing of his father Kim Jong-il, in late 2011.

Kim caused a stir earlier this year when he appeared in public having lost a large amount of weight, leading to speculation either that he had gotten healthier, or that he was perhaps ill. South Korean intelligence has reportedly concluded that the North Korean leader is not facing any particular health problem, nor is there any truth to rumors that the Kim appearing in public is a double, ABC News reported back in October.