Expanding the G7 is an Important Step in Countering China 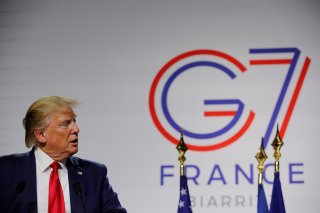 Amid growing tensions with China, President Donald Trump announced he is planning to invite Australia, South Korea, India, and Russia to the Group of Seven, often referred to as simply the G7. Having been founded during the economic turmoil of the early 1970s, the original purpose of the G7 was to facilitate greater cooperation among the world’s advanced economies on macroeconomic policy. Since then, the group has tackled a broader array of issues ranging from international security to environmental degradation. The president’s desire to expand the group’s roster, however, indicates Washington plans to move security concerns about China to the top of the G7 agenda.

Reflecting American apprehensions about China’s growing assertiveness, Trump’s proposed list of invitees includes the most strategic pieces of the Indo-Pacific security puzzle. First and foremost, the decision to invite both Australia and India would finally incorporate the remaining two members of the Quadrilateral Security Dialogue, a diplomatic and military arrangement formed in 2007 in response to growing Chinese influence, into the G7. Australia is concerned with China’s territorial ambitions in the South China Sea, along with Beijing’s growing economic and soft-power influence in Oceania. Meanwhile, India remains locked in competition with China for regional influence, with the two embroiled in a longstanding border dispute. Tensions between New Delhi and Beijing recently flared up again amid reports indicating a Chinese military buildup in the Galwan valley in the disputed region of Kashmir.

South Korea is another strategic piece of the security puzzle with growing concerns about China. Economic competition between the two countries is increasingly fierce, as numerous South Korean firms are losing their market share to Chinese competitors. Tensions are also growing on the security front, especially since Beijing’s decision to impose economic sanctions on South Korea in response to the deployment of American missile defense systems on the Korean Peninsula.

Lastly, although a generally unpopular idea among the U.S. foreign policy establishment, improving relations with Russia is necessary to prevent further solidification of the Moscow-Beijing axis. As noted by Doug Bandow, Washington’s “overtly hostile” policy towards Russia has resulted in ever closer cooperation between Moscow and Beijing. Indeed, feeling the pressure from NATO expansion, Russia has looked to secure its eastern flank through greater collaboration with China. At the same time, Western-led sanctions have had a similar effect on the economic front, prompting Russian firms to seek new markets in China.

Nevertheless, Russia remains apprehensive about its new eastern partner. Beijing’s growing military prowess in the Far East, along with its growing economic and political influence in Central Asia are very concerning for Moscow. Central Asia has traditionally been firmly in the Russian sphere of influence, and the Kremlin is keen to ensure Chinese activities in the region are conducted on its terms. Russia is likely waging a losing battle, however, given China’s substantial economic advantages and rapidly modernizing military—and the Kremlin knows this. Therefore, by engaging in pragmatic partnership with Russia, Washington can leverage these fissures to its advantage.

For the United States, expanding the G7 to institutionalize a security dialogue between Australia, South Korea, India, and Russia is an important step towards adapting its strategic posture to the new reality of China’s growing assertiveness. The combined military and economic weight of these countries, along with their geographic positioning around China, make them important strategic partners for the United States as it seeks to pressure Beijing and keep its wider regional ambitions in check. Moreover, given that China is approaching economic and military parity with the United States, Washington cannot afford to go it alone and needs all the help it can get to deter China. The same is even more true for Australia, South Korea, India, and Russia.

By contrast, the crown-jewel of Washington’s security architecture, NATO, is ill-equipped to deal with China’s growing assertiveness given that its primary focus is on security in Europe, not Asia. Already NATO has been criticized by some, including, Christian Whiton, as a Cold War relic. Indeed, given that the threat from Russia is greatly diminished, most NATO members seem content to rely on the United States for their security, shirking their responsibility to maintain military spending at two percent of gross domestic product. In other words, continuing to underwrite the security of NATO members is costly for the United States, and yields few benefits for its interests in Asia. Consequently, Washington needs to think differently.

Ultimately, an enduring strength of U.S. grand strategy has been its ability to evolve and cultivate alliances between new and existing partners. Following the end of the Cold War, however, Washington has seemed content to maintain the status quo. Nevertheless, the emergence of China as a near-peer competitor has provided the American leadership with an opportunity to programmatically update U.S. alliances to reflect the new global reality. Expanding the G7 is an important first step in this direction.

Matthew W. Gamble is a graduate student at McMaster University in Ontario, Canada. His research interests include geopolitics, defense policy, and authoritarian regimes.