Expert: ‘I Don’t Believe For a Minute’ North Korea Interfered in U.S. Election 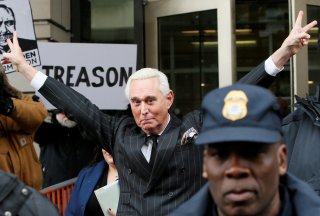 The elaborate conspiracy theories from those alleging fraud in the 2020 election, at their more creative limits, have blamed President Donald Trump’s loss on supposed underhanded actions by such foreign countries as China, Cuba and Venezuela. So it was perhaps only a matter of time before North Korea got pulled into the scheme.

But now it has, thanks to the long-controversial political operative Roger Stone.

Stone appeared on the program of the conspiracy theorist Alex Jones this week and claimed that “North Korean boats” had delivered bogus ballots to Maine, according to Newsweek.

“I just learned of absolute incontrovertible evidence of North Korean boats delivering ballots through a harbor in Maine, the state of Maine,” Stone said on Jones’s show, per Newsweek. “If this checks out, if law enforcement looked into that and it turned out to be true, it would be proof of foreign involvement in the election.”

Stone did not, needless to say, provide any evidence of this scheme, and the statements of “absolute incontrovertible evidence” and “if this checks out” would seem to contradict one another.

It’s also unclear how North Korea would have come up with such ballots or what a county that doesn’t have free or fair elections would know anything about election interference or, for that matter, the logistics of why a nation located in the Pacific would bring their boats to Maine, rather than the West Coast.

“I don’t believe for a minute that North Korea interfered in the U.S. election in any meaningful way, and if they did, it would have been to support Trump and not Biden,” Charles K. Armstrong, a retired professor of Korean Studies at Columbia University, told the National Interest in an email.

“Even to me, as a long-time follower of absurd news out of North Korea, this one is a doozy,” Barbara Demick, author of a book about North Korea called “Nothing to Envy,” said on Twitter.

“I only have firsthand knowledge of one harbor in Maine, but they’re pretty strict even about surfers landing on the wrong beach, so I feel like this is the kind of thing maybe someone might have noticed,” Twitter user Dr. Daniel Summers said.

“Discussing a rumor such as this only legitimizes it,” Kristen Schulze Muszynski, the director of communications for Maine’s Department of the Secretary of State, told Newsweek. “We have no evidence of any interference in our election, and we have completed our certification of the official results. We take voter fraud and interference allegations seriously and look into any substantiated claims. At this point, this vague rumor has absolutely no validity.”

Stone, a political operative known for Nixon-style “dirty tricks,” was convicted in late 2019 on charges of obstruction, making false statements, and witness tampering, all in connection with the Mueller probe. He was sentenced to forty months in prison but Trump commuted his sentence in July, days before he was to report to prison.

Stone’s ties to Alex Jones are not new; he appeared on Jones’s show on election night in 2016, where the two drank and toasted Trump’s victory.