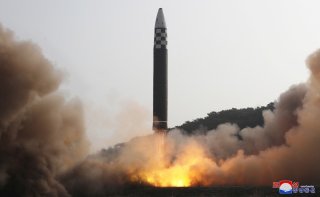 Four years ago, President Donald Trump and Supreme Leader Kim Jong-un were preparing for their first summit. Trump had dropped his “fire and fury” campaign and Kim had suspended intercontinental ballistic missile (ICBM) and nuclear tests. Although skeptics filled the ranks of Washington’s established Korea analysts, for the first time in decades there was a sense of possibility about the bilateral relationship.

The ensuing détente ended the following year with the failure of the Hanoi summit, though Kim maintained his testing moratorium. Last year, he indicated that Pyongyang was planning on ending its forbearance; in January, he unleashed a flurry of short-range launches, capped by a test of long-range missile components. Last month Pyongyang deployed its first ICBM in five years, though the regime apparently misrepresented the missile that was launched. And there is activity at the North’s nuclear site, suggesting a test there is imminent.

Speculation has focused on Kim desiring to force newly elected President Joe Biden to the negotiating table. That was the old model, with the Democratic People’s Republic of Korea (DPRK) greeting every new U.S. administration with a reminder that Pyongyang was waiting for concessions. However, few Washington analysts believe that the DPRK is willing to abandon its nuclear capability, irrespective of any promised benefits for doing so.

After all, Kim, like his father and grandfather, appears to be brutally efficient in retaining power and presumably has seen the video of Libyan dictator Muammar el-Qaddafi’s ugly demise—after he traded away his nukes and missiles for America’s and Europe’s favor. They proved to be faux friends ready to betray Qaddafi at their first opportunity. Add to that the lesson of Ukraine: give up your nukes in return for an unenforceable security guarantee, and get invaded.

Which offers a darker purpose of the North’s accelerating tests. So far, Kim has indicated no interest in talking with Biden, even though the North’s economy is suffering badly, not only from U.S. and United Nations sanctions but self-imposed, coronavirus pandemic-induced isolation. It appears that Kim has decided that he is unlikely to get the sort of economic relief he was denied at Hanoi, so there is no current reason to negotiate. That is, he is unwilling to agree to Washington’s official objective of comprehensive, verifiable irreversible denuclearization, so why bother talking?

While Kim hasn’t said so explicitly, he appears to be determined to expand and improve his nuclear arsenal sufficiently to eventually force Washington to negotiate on his terms. He certainly has not been conciliatory of late. Earlier this month he explained: “Only when one is equipped with the formidable striking capabilities, overwhelming military power that cannot be stopped by anyone, one can prevent a war, guarantee the security of the country and contain and put under control all threats and blackmails by the imperialists.”

The most obvious target of his vitriol is the United States, of course. However, South Korea, with a new, more hawkish conservative government soon to take power, also has been subject to the North’s ire. In this case, Kim loosed his favorite attack dog, his sister, Kim Yo-jong: “In case [South Korea] opts for military confrontation with us, our nuclear combat force will have to inevitably carry out its duty … a dreadful attack will be launched and the [South Korean] army will have to face a miserable fate little short of total destruction and ruin.” She described the South Korean defense minister as a “scum-like guy” and his comments as the “hysteria of a lunatic.” He had threatened preemptive strikes if the North prepared to fire missiles at the Republic of Korea (ROK).

Relations with the ROK are likely to worsen when Yoon Suk-yeol assumes the presidency. He promised to take a tougher stand toward the North and work more closely with the United States. Although this approach is unlikely to achieve much more than President Moon Jae-in’s variant of the Sunshine Policy—no South Korean administration has ever caused anything more than a temporary improvement in bilateral relations with the DPRK—it is more likely to enrage Pyongyang. After all, taking Yoon at his word suggests that there will be no more craven concessions, such as banning private efforts to spread information to the North’s people.

What to do? The current administration’s strategy looks a bit like the Obama administration’s “strategic patience”—aka, kick the can down the road approach. If Pyongyang was doing no more than insulting Washington and Seoul, that strategy might work. However, the North appears to be moving forward full speed to expand its arsenal and, more important from Washington’s standpoint, extend its reach. In just a few years, the RAND Corporation and Asan Institute figure Pyongyang could have a couple of hundred nukes with ICBMs capable of hitting the U.S. homeland. That would be a game-changer.

Although it is impossible to know Kim’s mind, building up his military while refusing to engage Washington suggests he plans to create an arsenal too large for even the harshest DPRK critic to try to dismantle. Gaining the ability to strike U.S. targets would necessarily and dramatically limit America’s options. Washington’s involvement even in a conventional conflict could trigger nuclear retaliation. Yet despite the strong ROK-U.S. ties, they are not worth risking the destruction of American cities.

Washington cannot look to other nations for answers. Through 2017, the United States could rely on China to at least discourage the North’s most ambitious plans. For a few years, Beijing even approved and enforced a succession of new United Nations sanctions. However, Chinese president Xi Jinping switched course after Washington and Pyongyang announced their summit plans, which raised the possibility of a modus vivendi between the DPRK and United States, leaving the People’s Republic of China (PRC) behind. Xi met Kim for the first time and normalized what had been a cold friendship at best. Xi has since maintained that course.

Despite the slight fillip in Sino-American relations after Biden’s inauguration, these ties seem destined to head downward. Disputes over Xinjiang, Taiwan, the South China Sea, and more are no closer to resolution. Beijing’s soft support for Russia in the latter’s war on Ukraine is driving another wedge between the United States and PRC. Kyiv’s plight has captured public attention and energized the most hawkish elements of the increasingly reckless Republican Party, which already seemed comfortable with, if not quite determined on, war with both China and Russia.

Moscow also has influence in the DPRK, though Russia long has trailed Beijing in clout. Today the Putin government has no interest in assisting the United States against Pyongyang even if doing so theoretically advanced Russian objectives. Moscow is more interested in causing trouble for America than reducing trouble by North Korea.

Japan was a member of the six-party talks and could play a role, but the status of Japanese kidnapped by North Korean agents decades ago has long deadlocked negotiations with the DPRK. Tokyo’s ties with the South also are difficult, though the incoming ROK administration hopes to improve this relationship. One advantage of improved coordination between the ROK and Japan—both market-oriented democracies seeking peace and stability in Northeast Asia—would be effectively adding Tokyo’s economic and growing military clout to the inter-Korean balance.

Seoul has the most at stake in DPRK relations but has been left with little authority by the United States. Thus, the North treated even the Moon administration, which did its desperate best to conciliate and appease Pyongyang, with contempt after the collapse of the Hanoi summit. Only an American exit, vigorously opposed by South Koreans across the political spectrum, would force the North to treat the ROK more seriously.

Absent such a switch, Washington appears to have no option other than doing more of the same, which has consistently failed over the last three decades. Despite claims that additional sanctions might bring the North to heel, the Kim government has survived both the pre-2017 period of tougher and more seriously enforced penalties as well as almost complete isolation during Covid-19.

The prospect of conventional retaliation, especially against South Korea’s capital of Seoul, was enough to deter prior U.S. administrations, most notably that of Bill Clinton, from striking North Korean nuclear facilities. Despite Trump’s flirtation with military action during his “fire and fury” stage, the North’s presumed possession of two to three score nukes would have magnified the cost of U.S. military action many times. And while the war would have been “over there,” as the ever war-happy Sen. Lindsey Graham indecorously put it, the human costs would have been catastrophic and included plenty of Americans. As Pyongyang continues to work on a panoply of weapons, including hypersonic and submarine-launched missiles, it soon will be able to retaliate “over here” too, making U.S. military action an impossible option.

The United States should prepare for ICBM and nuclear tests, as well as continued development of new and improved weapons. Alas, Washington has no answer. It complains about every test, demonstrating that it is unnerved by the North’s policy. Then the United States incrementally adds sanctions, without effect. And today the North refuses to even discuss denuclearization.