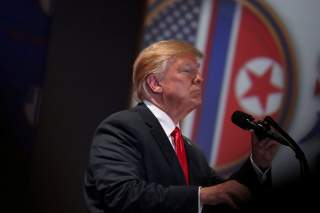 The future of North Korea is a great question—and a reminder of Yogi Berra’s wisdom when he said: “It’s tough to make predictions, especially about the future.”

Nonetheless, my bottom line: 2019 promises more of the same. Where this conflict stands today is not good. But it is better than it was when Trump took office, and better than it would be under a Clinton administration following conventional wisdom.

Remember what Trump inherited: a North Korea conducting nuclear and missile tests—on the cusp of a credible threat to deliver nuclear strikes on our homeland. Thanks to a strange conjunction of individuals and actions, Pyongyang has stopped these tests. This is the “most important” step toward reducing the threat, former director of Los Alamos National Laboratory Siegfried Hecker has noted, because “North Korea needs more nuclear and ICBM tests to be able to reach the US.”

At this point, Kim Jong-un has committed to complete denuclearization, and Trump has accepted that promise—declaring that they “fell in love.” Whatever the reality, both Trump and Kim have sufficient reasons to persist.

The expert community remains not just skeptical but derisive. And it is hard to read some of Trump’s tweets without raising one’s eyebrows. But I remember Ronald Reagan’s “delusion” that he could persuade the leader of the Evil Empire to abandon totalitarianism and begin to embrace Western ideals of freedom and democracy. But Gorbachev did. Watching Kim’s wide eyes as he toured Singapore, including hotels with infinity pools, it’s not inconceivable that Trump succeeded in taking a page from Reagan’s playbook.

At the end of 2019, North Korea will probably still have nuclear weapons. The United States will persist in its sanctions campaign—with limited effect. Moon will keep pushing his theory that thickening inter-Korean relations is the primary driver of denuclearization. And there will still be a serious risk of war, which, as Defense Secretary Jim Mattis has warned, would be “catastrophic.”

What is likely to happen if the current “deal” collapses? If Trump concludes that he was trumped, all bets are off. Will Kim return to testing intercontinental ballistic missiles? If he does, will Trump attack North Korean launch sites? Will that lead to a second Korean War? And where would that end?

If we compare where we stand today with where we were a year ago contemplating “fire and fury,” our best hope is that Trump and KJU continue down the current path.