The Hanoi Summit – We Asked Abraham Denmark What Happens Next in U.S.-North Korea Relations 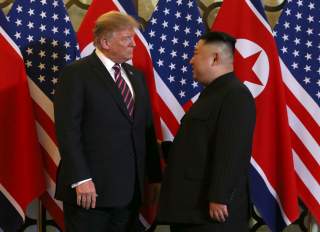 A week after the second Donald Trump-Kim Jong-un Summit, a senior U.S. State Department officialreportedly stated that “the ball was in North Korea’s court,” and that “it is going to be up to the North Koreans, to some extent, to decide to engage on meeting some of the expectations that are out there on denuclearization.” Historically, this usually means that negotiations between Washington and Pyongyang have stalled, and there are few expectations for any near-term progress.

In all likelihood, U.S.-North Korea relations are about to enter a period of relative stasis. But this stasis is based on the assumption that both leaders believe that time is on their side. There is a good reason to believe this: absent an agreement, Kim remains free to continue building nuclear weapons and ballistic missiles while finding more ways to circumvent international sanctions. President Trump is also not likely to push on this issue, as he has already declared success with North Korea and is expected to focus on trade negotiations with China and domestic issues in the lead-up to the 2020 presidential campaign.

However, it is possible that Kim is not, in fact, comfortable with his current position. Indeed, a key argument from the Trump administration has been that Kim has engaged in this diplomacy because of the significant, comprehensive sanctions that have been put in place against North Korea since 2015. If this is accurate, then Kim may not be comfortable with simply watching nuclear warheads and ballistic missiles roll off the assembly line. Instead, if the theory holds, Kim is likely to grow increasingly insecure about the health of the North Korean economy and his own political legitimacy. He may then lash out in an attempt to put pressure on Washington and build leverage for eventual negotiations. Reports of activity at a North Korean rocket test site suggest that Pyongyang is not going to sit on its hands, though Kim is unlikely to go so far as to completely alienate Beijing.

Additionally, President Trump may decide to take the initiative in order to break a stalled diplomatic process. Such an action strikes me as unlikely, as doing so would only highlight the failure of his North Korea strategy and there are few prospects for actual diplomatic success following the disappointment of Hanoi.

Abraham M. Denmark is Director of the Asia Program at the Woodrow Wilson International Center for Scholars, and previously served as Deputy Assistant Secretary of Defense for East Asia. The views expressed are his alone.