The Hanoi Summit – We Asked Denny Roy What Happens Next in U.S.-North Korea Relations 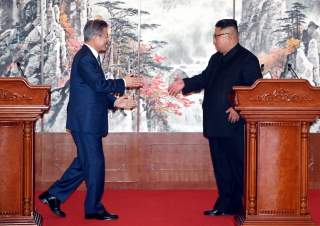 Following the Hanoi impasse in U.S.-North Korea negotiations, two questions loom over the future of the process. The first question is how badly does Pyongyang want sanctions relief from the United States. The breakdown in Hanoi suggested that sanctions—not the “peace regime,” political recognition, or U.S.-ROK military exercises—are Pyongyang’s overwhelming concern, and that Kim might have difficulty in the future climbing down from his demand that the United States immediately drop the bulk of the most painful sanctions.  But is Kim desperate?  South Korea’s government seems eager to offer economic assistance on the margins, and Chinese enforcement of sanctions has softened again after peaking in 2017. If Pyongyang is not willing to offer more denuclearization for less sanctions relief, the stalemate will likely continue.

The second question is whether Washington will return to the threat of a military strike in the absence of progress toward voluntary DPRK denuclearization. In my view that is unlikely as long as North Korea refrains from nuclear or missile testing. Washington would probably opt instead for secondary sanctions, such as cutting off the DPRK from the international financial system. Pyongyang, however, says its commitment is limited to a freeze on “routine” testing, leaving the door open for what the DPRK might claim is a one-off or exempt test such as a launch ostensibly connected to North Korea’s space program. It is unclear at this point if Pyongyang intends to launch a rocket from the revived Sohae Satellite Launching Station or is merely using the threat of a launch to pressure Washington to offer a deal more favorable to the DPRK. What is clear is that even recent North Korean commitments are highly retractable, and that Pyongyang is willing to press Washington’s hottest button to get what Kim wants.

As for the way forward, there seems to be universal agreement—with the possible exception of the one man whose view counts—that the White House should let the experts in the U.S. bureaucracy do their jobs before the next summit rather than relying on paramount leader spontaneity.  One possibility is to redirect effort away from the most desired but most difficult objectives of the two sides—sanctions relief for North Korea, and denuclearization for the United States—toward achieving agreement on less contentious issues such as a peace declaration or an exchange of government liaison offices. This approach, however, would have the downside of enabling Kim to prolong the process with empty gestures while consolidating North Korea’s status as a permanent nuclear weapons state, if that is his intent.