The Hanoi Summit – We Asked Devin Stewart What Happens Next in U.S.-North Korea Relations 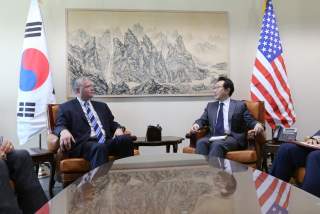 Everyone,including Kim Jong-un, was surprised the Hanoi summit produced no deal. How could have we have foreseen the Michael Cohen testimony hindering Trump’s ability to negotiate?

Recent evidence suggests Trump may be pivoting toward a harder, maximalist approach. An incremental one, however, is probably more realistic: The two parties can revisit the chips they were considering bargaining, including a statement ending the Korean War, suspending some sanctions, closing down Yongbyon, and establishing liaison offices in Pyongyang and Washington, DC.

The key to broadening the range of possibilities in U.S.-North Korean relations is adjusting the frame in which it is viewed. I’ve counted at least a dozen fallacies that continue to fog up and harden the analysis on the Democratic People’s Republic of Korea (DPRK) among pundits. Here are four.

1. A narrative arc with a cinematic ending. Critics are wrongly expecting a dramatic ending to the Washington-Pyongyang talks like Stalin, Churchill, and Truman at the Potsdam Conference in 1945 or Germans tearing down the Berlin Wall in 1989. Contrary to the way we imagine it, history doesn’t resemble the movies. Rather, talks with the DPRK will proceed like all negotiations: a series of messy steps that no one will ever be completely happy with.

2. “What’s the endgame?” There is none. Talks with North Korea are not a game with a winner and loser. That question belies a misreading of history as a series of games. The United States found an end to the Cold War with the Soviets in 1991, and yet Washington is still negotiating its relationship with Moscow. It’s important to find a system for managing conflict in Northeast Asia. The short-term goal should be to move yet another step toward peace today.

3. A slippery slope. Pundits, claim, “If we accept DPRK as a nuclear state, then all of East Asia will go nuclear.” That’s a slippery slope or domino fallacy, as identified by T. Edward Damer in his textbook on faulty reasoning. The DPRK is already a nuclear state whether we accept it or not. If North Korea is a de facto nuclear state, then it does not follow everyone else will automatically pursue similar arsenals. Even if the states in question—Japan and South Korea—do manage to overcome domestic opposition and build nukes, they are still U.S. allies.

4. The fallacy of composition, which much criticism suffers from. You might not like Trump’s character or language, but that does not mean his administration cannot pursue worthy policies.

Devin Stewart is senior fellow and director of the Asia program at Carnegie Council for Ethics in International Affairs and a Truman Security Fellow. He has served as an adjunct professor of international affairs at Columbia University and New York University. The views expressed here are his own. Follow him on Twitter: @Devintstewart.