The Hanoi Summit – We Asked Grace Liu What Happens Next in U.S.-North Korea Relations 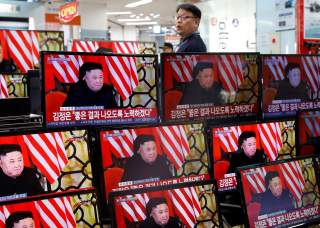 President Donald Trump and Kim Jong-un failed to reach a deal last week in Hanoi, a surprising result to even the most skeptical viewers, who expected to see some vague agreement on “denuclearization” in exchange for sanctions relief.

Despite this negative outcome, KCNA, a North Korean state media outlet, called the summit a “meaningful opportunity . . . to further the interests of the U.S. and DPRK” and said the leaders were able to make “remarkable progress” during this meeting. President Trump echoed similar sentiments in his press statement saying, “I think actually, it was a very productive two days,” and that his relationship with Kim remains “very strong.”

Although official statements from both governments relay optimism about the summit and the future of U.S.-DPRK relations, their actions seem to indicate otherwise.

The day after the summit, open-source analysts noticed activity at North Korea’s main launch site and a rocket production facility, indicating that North Korea could be preparing to launch a satellite or a missile. It’s still unclear if Kim Jong-un is using these rocket launch preparations to urge Trump to return to negotiations. In response, U.S. National Security Adviser John Bolton told Fox News, “the president is obviously open to talking again” but is not “desperate” for a deal. Bolton said in another interview that the United States’ strategy now is to wait for North Korea to make the next moves to return to negotiations.

These responses from the Trump administration seem to reflect the same mistakes that likely led to the failed summit in the first place: a failure to discern North Korean messaging or address the rift that still divides North Korean and U.S. expectations for a future agreement.

The North Koreans have not been cryptic or secretive about their requests for sanctions relief. State media consistently mentioned that the United States should relax sanctions in exchange for confidence-building steps towards denuclearization. The Trump administration’s claim that North Korean demands were unexpected is either an excuse for not reaching an agreement or a failure of the administration to thoroughly scrutinize its counterpart prior to the summit.

Moving forward, the administration must address the valley that still separates its (albeit unrealistic) expectations for immediate and complete denuclearization by North Korea and North Korea’s requests for economic aid. If the United States decides that there is no room for compromise, then it must acknowledge that a deal cannot be reached at this time. Stringing along Kim Jong-un will only push the North Koreans to partake in more signaling and lead to increasingly escalatory actions while waiting for a deal that will never come.