The Hanoi Summit – We Asked Karl Friedhoff What Happens Next in U.S.-North Korea Relations 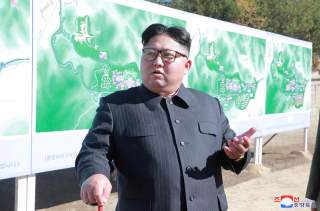 With the top-down approach to diplomacy of President Donald Trump, it finally felt like the United States had reclaimed at least part of the initiative from North Korea. But by walking away from a limited deal when there was no big deal to be made in Hanoi, Trump has now been backed into the same corner as his predecessors. Kim Jong-un has seized the wheel, with reports that North Korea may be prepping an SLV launch. If such a launch takes places, Trump will be faced with three bad options.

First, he could do the unthinkable and downplay such a launch, focusing on the right of every nation to the peaceful use of outer space, in hopes of keeping negotiations alive. This would be disastrous. It would unilaterally concede a long-standing American position, undermine multiple UN Security Council resolutions and the UN Security Council more broadly, and lead to further questions about American credibility in the region. It would also guarantee future North Korean launches, and bring Trump withering criticism from Republicans and Democrats alike.

Second, and more likely, he can condemn the launch, citing it as a violation of multiple UN Security Council resolutions. This will end negotiations for the foreseeable future and escalating tensions will ensue. If that happens, Trump’s poor judgement and inability to stay on message will inevitably lead to Trump himself being viewed as the belligerent party. It will reinforce the perception that it is the United States—not North Korea—that is the destabilizing force in the region.

Third, if no launch takes place the door will remain open for negotiations. But North Korea will have once again re-materialized a bargaining chip. In some future negotiation, it will once again deconstruct the launch facility at Sohae and use it as evidence that it is taking steps to denuclearize. U.S. concessions will be expected.

This process has taken place before and it will almost certainly take place again. In each future iteration the focus of the negotiations will shift further away from the core nuclear production facilities and weapons and more toward ancillary nuclear facilities. All the while, the United States will still be grasping blindly for some grand bargain that will fully denuclearize North Korea. Of course, by that time North Korea will have moved from de- and re-constructing launch pads to doing the same with the rail lines that serve those launch pads and selling that as progress. For North Korea, it will be.

Karl Friedhoff is a fellow in public opinion and Asia policy at the Chicago Council on Global Affairs. His writing as appeared in The New York Times and The Wall Street Journal, among others, and he has been a frequent guest on both TV and radio to discuss U.S. foreign policy in Asia, South Korea’s politics, and international relations in East Asia.