The Hanoi Summit – We Asked Mary Chesnut What Happens Next in U.S.-North Korea Relations 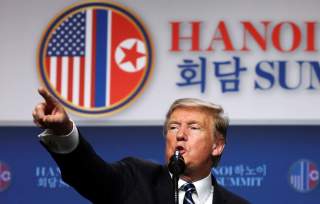 The failure of President Trump and North Korean leader Kim Jong-un to reach a deal in Hanoi was the result of mutual miscalculation; each side expected that they could spend less and get more than what their counterpart was ultimately willing to put on the table. From North Korea’s perspective, offering to shut down the Yongbyon facility was a fair concession. For the United States, the costs were simply too high to gamble full UN sanctions relief on an untrustworthy regime (especially in light of the administration’s withdrawal from the Iran Deal). Granted, there areconflicting reports about what level of sanction relief North Korea demanded, but this rollercoaster of hype, miscalculation, and walking away showcases the drawbacks of a leader-to-leader, top-down negotiating approach.

But while Hanoi may have been much ado about nothing, most see it preferable to renewed threats of Fire and Fury.

In the short term, it is hard to say what will ensue. Perhaps relations fall back into a cool homeostasis: Kim keeps pursuing improved relations with South Korea while continuing to quietly enrich additional weapons-grade material. Trump will likely be appeased as long as North Korea continues its moratorium on missile and nuclear testing until after the 2020 election.

Alternatively, Kim and Trump may try for a third round of talks. The two seem to have a genuine rapport and appear reluctant to call it quits. Moreover, North Korea has made clear that the removal of crippling sanctions is a top priority—even over security guarantees. If another summit is announced, it would be wise to have more preparation and preliminary negotiations in the days or weeks preceding the formal meeting. Substantive negotiations regarding specific facilities and sanctions need not be debated just hours before the pre-scheduled “signing ceremony.”

A third possibility is that North Korea will resume missile testing, which some experts believe it eventually needs to do to obtain a truly credible deterrent. After all, the few flight tests North Korea has conducted are by no means irrefutable evidence of a functional intercontinental ballistic missile. Additionally, North Korea has not produced a reliable re-entry vehicle that can withstand atmospheric re-entry.

In the long term, it would behoove the United States to continue diplomatic engagement with North Korea where possible, as prolonged instability is worrisome both domestically to Americans and to U.S. allies. Moreover, the humanitarian toll caused by these sanctions is severe. But Washington does need to come to terms with reality. America is no longer working within the context of the Agreed Framework from the early 2000s. The nascent nuclear capability that was once used just as a bargaining chip for fuel and economic relief has now morphed into a very real threat, something that may be too valuable for North Korea to give up completely. In Kim’s perfect world, he will keep his nukes and also show North Koreans relative economic prosperity—having his cake and eating it, too. Once Washington realizes that prompt, unilateral, complete, verifiable, irreversible dismantlement (CVID) is not on the table, perhaps the United States can begin to make real headway—whether that be a “less for less” deal or otherwise.

My bottom line: there is no shame in exhausting all diplomatic possibilities. Our priorities now should be: reassuring our allies, reducing tension where possible, and hoping that sanctions continue to ramp up pressure on Kim and bring him back to the table—next time ready to offer more favorable terms. Until then, references to Libya and tweets evoking bloody nose strikes are not productive.

Mary Chesnut is the program manager at the Nuclear Security Working Group. Mary is a current member of the Nuclear Scholars Initiative program, which is part of the Project on Nuclear Issues (PONI) at the Center for Strategic and International Studies (CSIS). Mary received an MA in national security and intelligence from The Patterson School of Diplomacy and International Commerce at the University of Kentucky, and a BA in Russian from Rhodes College, where she was elected Phi Beta Kappa.