The Hanoi Summit – We Asked Minseon Ku What Happens Next in U.S.-North Korea Relations 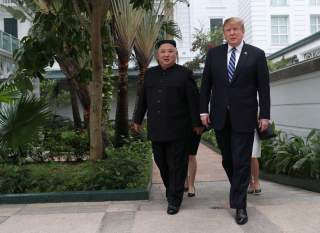 While many around the world expressed disappointment over the no-deal result of the second Trump-Kim summit in Hanoi, we ought to be reminded of three things. First, the denuclearization process rests fundamentally on mutual trust which is still visibly absent between the United States and North Korea, as indicated by their differences on the existence of secret nuclear complexes. Mutual trust is more than just about “chemistry” between two leaders, because leaders do not make critical decisions based on personal relationships alone. It is structural as well and involves consistent and reliable communication between not just the leaders, but officials at working level as well. This implies that trust-building between the two countries can only be a protracted and arduous process that would not bring results within a short period of time.

Second, and related to the first point on the importance of building trust between the two countries, is that there is a long history of distrust between them. The mutual distrust is not only a product of Cold War, but more concretely a product of numerous rounds of failed negotiations over denuclearization since the 1990s. Both sides have definitely “learned” something from these past failed negotiations, but what they have learned is how to derail negotiations and not how to make them successful. As such, patience is virtue as both countries need to learn more about each other through negotiations and summits, which may not always bear substantial fruit.

Third and last, South Korea’s mediating role should be maximized at critical moments like this. Utilizing South Korea’s role works in two ways. On the one hand, the United States should capitalize on the interest of the current South Korean administration that seeks engagement with the North by consistently sharing vital information regarding North Korea’s nuclear activities. Keeping South Korea in the dark only sends signals to North Korea that the alliance is open to exploitation. On the other hand, South Korea also bears the responsibility of remaining actively engaged and invested in U.S.-North Korea negotiations. While South Korea did play an active role in actualizing the Singapore Summit, it is unclear if it remained equally engaged in the days leading up to the Hanoi Summit. Its mediating role becomes even more essential in the current tenuous phase of trust-building between the United States. and North Korea.

These three reminders may dispel concerns over the lack of a deal following the Hanoi Summit, yet they also caution how fragile the entire process is in the absence of mutual trust.

Minseon Ku is a PhD student in International Relations at The Ohio State University.