The Hanoi Summit – We Asked Peter Harris What Happens Next in U.S.-North Korea Relations 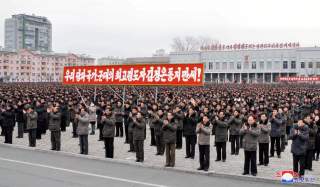 The Hanoi summit between Donald Trump and North Korean leader Kim Jong-un was a failure in the sense that no progress was made towards the denuclearization of the Korean Peninsula. But even so, the context of U.S.-North Korean relations will never be the same again. This is especially true on the U.S. side of the equation, with the summitry of the past year seemed to demonstrate that U.S. leaders enjoy more domestic leeway to conciliate Pyongyang than previously thought.

Trump has approached the North Korean issue with more confidence than any past president. Whereas his predecessors moved cautiously, rarely evincing optimism that Pyongyang would bow to U.S. demands, and usually seeking the pool responsibility for “solving” the problem with other regional stakeholders, Trump has declared a grand bargain with North Korea to be within reach. He shows no trace of apprehension that pursuing diplomacy will open himself up to charges of “weakness.”

To be sure, the President’s bombast—his proclamations of “love” for Kim, for example—has provoked some ridicule, exasperation, and even condemnation from his critics at home. But Trump’s ebullient approach to North Korea has not sparked anything close to a political backlash. This is significant.

After all, North Korea is the most brutal dictatorship in the world, the Axis of Evil’s “last man standing.” It stands to reason that U.S. presidents might be wary of extending the hand of friendship to such a regime, lest they invite a torrent of opprobrium on the domestic front. So far, however, Trump has attempted a new, bold, and risky strategy without incurring any serious punishment.

There has been no analog to the “open letter” sent to the leaders of Iran, in which forty-seven Republican senators promised to undo any diplomatic accord reached between the Obama administration and Tehran. Nor have there been any congressional resolutions meant to pressure the President into switching gears, such as happened in response to Trump’s mooted withdrawal from Afghanistan. This suggests that the U.S. political system—including the President’s own Republican Party—is now primed to accept a peace deal with North Korea, should one be forthcoming.

Of course, the biggest barriers to peace remain on the North Korean side. It is the domestic calculus in Pyongyang that needs to shift for diplomacy to succeed. But if peace comes, it will be because both sides made concessions. And that means paying attention to U.S. politics, too.