The Hanoi Summit – We Asked Richard Heydarian What Happens Next in U.S.-North Korea Relations 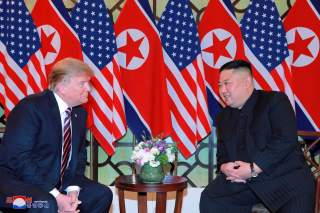 I agree with the U.S. President Donald Trump that no deal is better than a bad deal. Yet, I also believe that what happened in Vietnam only exposed the utter lack of preparation and realism on his part. As Malaysian prime minister Mahathir Mohamad told me in an interview recently, Trump failed to appreciate “how much sacrifice” North Korea made to achieve a semblance of nuclear parity with bigger powers. Thus, expecting them to denuclearize after a ‘big bang’ summit or two was extremely unrealistic. In the same breadth, I would also argue that, partly based on my own interactions with senior North Korean officials, that there was also a level of naiveté on the part of Pyongyang. After all, Trump is not a “supreme leader” with absolute control over crucial decisions, even in the realm of foreign policy where the executive has enjoyed significant latitude since the Vietnam War years. That’s why I wouldn’t dismiss North Korea’s lamentation that the summit in Hanoi was a missed opportunity, probably one of a lifetime.

I think everyone, including Trump, also underappreciated how domestic politics, particularly the ongoing investigations into the Trump election campaign and alleged ties with Russian elements, has an increasingly potent bearing on American foreign policy. If anything, the American president himself was unsurprisingly forthcoming on this matter, openly complaining (via his Twitter account) that “[f[or the Democrats to interview in open hearings a convicted liar [and] fraudster [Michael Cohen] at the same time as the very important Nuclear Summit with North Korea, is perhaps a new low in American politics and may have contributed to the “walk” [out]. Never done when a president is overseas. Shame!” It’s hard to imagine Trump not following the sensational testimony provided by his decade-long chief legal counsel and aide, while trying to figure out a high-stakes diplomatic gambit.

The reality, however, is that both parties can’t afford to permanently walk out of the whole diplomatic gamble. North Korea needs to reverse sanctions that are debilitating its increasingly fragile and China-dependent economy, while the world can’t turn a blind eye to Pyongyang’s burgeoning nuclear power. The way forward, however, is slightly awkward: Trump will have to do what Obama did with respect to Iran, whereby a series of highly technical, snail-paced, and calculated negotiations produced a step-by-step, phased concessions that culminated in a historic non-proliferation deal, which was the American president dismissed as “the worst deal ever.”