The Hanoi Summit – We Asked Stephan Haggard What Happens Next in U.S.-North Korea Relations 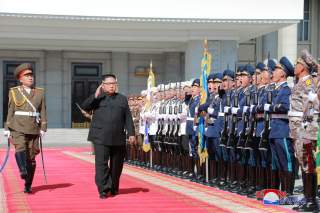 Judgments on whether the Hanoi summit was a success or failure rest on your precedents: what was reasonable to expect? On the negative side, Trump’s over-confidence in his negotiating abilities probably influenced the decision to try again. And I find it more than a little curious that the President and his team are claiming credit for walking away from a bad deal despite the fact that they already knew what was to be offered. Why send the president half-way around the world to achieve precisely nothing?

On the other hand, the chances of getting much done at Hanoi were limited to begin with. Even if there had been some deliverables--such as an end-of-war declaration or North Korea’s destruction of some minor facility or equipment—the action was ultimately elsewhere. The key outcome was always the continuation—or not—of working-level talks that could take many months, perhaps even years, to drive to a meaningful conclusion.

Further, we now have evidence from Steven Biegun—the administration’s lead negotiator—that the North Koreans as well as the Americans over-reached. As expected, the U.S. has finally come around to pretty much the same strategy that Christopher Hill pursued for George W. Bush in 2007-8: to focus on shutting down Yongbyon and thus North Korea’s ability to produce more fissile material. This strategy is a start, but does nothing about the two reactors on the site, other activities there, stockpiles of fissile material outside Yongbyon, and the nuclear weapons and delivery systems themselves. While an important start, making an imprecise offer on two facilities—the enrichment and reprocessing plants—was pretty thin gruel.

Moreover, the North Koreans sought a big payday for this modest offer. Rolling back all UN Security Council resolutions in place since 2016 would effectively eliminate the most important sanctions that China has been willing to put in place to date: those on North Korea’s commercial exports. Moreover, once you start to meddle with firm multilateral commitments such as those contained in UNSC resolutions, the door is open to a complete unwinding of the sanctions regime.

I predict two things: the North Koreans will figure out how to poke the U.S. in a way that does not permit easy retaliation, but they will also signal an interest in getting back to the bargaining table. We could have some bumpy times ahead, but it is progress on the working-level talks that ultimately will decide whether Hanoi was a failure or a blip.

Stephan Haggard is the Lawrence and Sallye Krause Professor of Korea-Pacific Studies and director of the Korea-Pacific Program at UC San Diego. He is a Visiting Fellow at the Peterson Institute for International Economics and has been a consultant to AID, the World Bank, the United Nations Conference on Trade and Development, and the OECD and is a member of the Council on Foreign Relations. You can follow him on Twitter at @StephanHaggard.