Has North Korea Given Up on a Deal with Donald Trump? 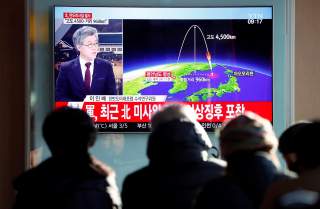 North Korean leader Kim Jong-un’s message at the Korea Workers’ Party plenum included a welcome memo for President Donald Trump: Pyongyang has not given up on diplomacy and a deal is still on the table. The end of the year deadline for diplomacy to work its magic was therefore not set in stone. That’s good news for the U.S.

This makes sense. Kim needs an agreement with the U.S. including sanctions relief to deliver on his promise of improved economic conditions for ordinary North Koreans. Without sanctions relief, North Korea can continue to grow its economy but it will never become a new Vietnam or China. In the months since the Hanoi summit, Pyongyang has sometimes indicated in public that it does not need sanctions relief. The reality is quite different.

Indeed, North Korea has continued to send the message through different channels that it expects a deal, sanctions relief, and trade and investment links with the rest of the world. This matters, for it suggests that Pyongyang thinks that an agreement will be signed at some point.

The bad news for Trump, however, is that Kim’s message on New Year’s Eve suggests that it might be about to give up on him. Kim indicated that North Korea will continue to boost its deterrent, and implied that the nuclear and long-range missile test moratorium no longer holds.

Even though North Korea might not conduct an ICBM test in the near future, never mind a nuclear test, it has put Trump on alert. Without a deal, Pyongyang does not feel bound by previous promises.

If China, and Russia, signal that an ICBM test will not result in a new round of UNSC sanctions, North Korea might feel emboldened to go ahead. More realistic, however, would be for Pyongyang to carry out other actions such as a submarine-launched ballistic missile test or a satellite test. Any of these would signal the shift towards the development of strategic weapons announced by Kim.

Furthermore, Kim has told North Koreans that they should prepare to tighten their belts. The North Korean leader has suggested that he expect sanctions to remain in place for the time being. Therefore, North Koreans should be ready to fend for themselves if necessary.

In other words, Kim does not seem to believe that Washington and Pyongyang will necessarily sign a deal leading to better economic conditions for North Korea in the coming months. After all, the further we move away from the Hanoi summit, the less likely it might seem for Kim that Trump will actually sign a proper and actionable deal.

Indeed, Pyongyang has not given a timeline for a possible deal with Washington. Kim could sign an agreement with Trump, but he could also sign it with a future U.S. president. The North Korean leader is not the one running for re-election this year.

If Kim has indeed given up on Trump, for the time being, there are two realistic scenarios in the months ahead. The first one is that the U.S. president decides that it is in his interest to sign a deal with Pyongyang including concrete steps towards denuclearization in exchange for sanctions relief or exemptions. He could present this as a ‘victory’ to U.S. voters, for indeed a majority of Americans believe that Trump calls the shots when it comes to the situation in the Korean Peninsula. Kim would be likely to grab this opportunity, for it would vindicate his diplomatic overture since 2018. Suddenly Trump and Kim would be best friends again.

The second scenario involves a period of diplomatic stalemate until the political situation in the U.S. becomes clearer. This means, above all, whether Trump is re-elected or not. Pyongyang can sit out a few months until the November US election, even engaging in some provocations as long as it does not cross the red line of an ICBM or nuclear test. But it cannot sit out a second Trump term in the hope that ‘someone better’ might come afterwards. At some point it will have to sign a deal – whether with Trump or whoever replaces him.

It should not be forgotten that the U.S. has the upper hand in negotiations with North Korea. Pyongyang needs an agreement to improve its economic situation and become a more respected member of the international community. The U.S. does not. But Trump is not the only president that can give Kim what he wants. From his perspective, the ball is in the Oval Office’s court now.

Ramon Pacheco Pardo is the KF-VUB Korea Chair at the Institute for European Studies of Vrije Universiteit Brussel and Reader (Associate Professor) in International Relations at King’s College London.