To Have Any Chance at Ending the Korean War, America Must Become More Flexible 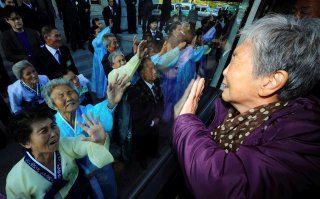 As Koreans commemorate the 70th anniversary of the outbreak of the Korean War, they do so in a year which marks the 20th anniversary of the first inter-Korean summit between President Kim Dae-jung and Chairman Kim Jong-il.  In that historic summit, the two leaders pledged peaceful coexistence between the two Koreas. Despite this, the armistice has never been replaced with a peace treaty, and an end to the Korean War remains an elusive dream to this day.

Lately, there have been high expectations for ending the Korean War—since President Moon Jae-in and Chairman Kim Jong-un held their own historic first summit at Panmunjom two years ago. The two leaders just about declared the end of the Korean War in declaring that there will never be war on the Peninsula. Indeed, coming to office, President Moon has made it clear that his top priority is establishing a permanent peace regime on the Korean Peninsula.

There are only two ways to achieve this. One is unification of the two Koreas, yet any hasty move to unification would likely cause more uncertainty and chaos, raising the possibility of military conflict. The other option is peaceful coexistence between the Koreas, and the Moon administration has made this second option its policy priority. A peace treaty is a key component to the peace regime, and a peace treaty by definition would mean the end of the Korean War.

Any peace treaty would require the respective blessings of the U.S. and China, the two other important parties to the Korean War. Yet another historic first summit, that between President Trump and Kim in Singapore the same year, did raise high hopes for an end to the Korean War, but the problem is that Washington wants to see Kim give up his precious nuclear program before rather than after a peace treaty. Since the failed second summit between the two in Hanoi last year, nuclear talks have turned out to be difficult once more with no signs of progress.

With a sense of frustration and betrayal, Kim is going back to the old playbook of upping the ante on the Korean Peninsula. As North Korean officials attack their South Korean counterparts with aggressive statements, tensions are on the rise, and the latest North Korean action of blowing up the joint liaison office in Kaesong puts the whole peace process in jeopardy. Whatever the reasons behind it, North Korean behavior is presenting a serious challenge to Moon’s drive toward denuclearization and a permanent peace regime on the Korean Peninsula.

The Korean War may not end this year, however it could still end within the next five. Inter-Korean relations have seen many ups and downs, with plenty of crises over the past decades, and past crises have led to new openings and dialogues between the two. It is difficult to imagine that North Korea would risk a war with the much more rich and powerful South Korea backed by its U.S. alliance and associated nuclear deterrents. It would also be increasingly difficult for North Korea to refuse South Korea’s persisting offers of peace and assistance. When the two Koreas come back to the negotiating table, Washington needs to do its part with a more flexible approach to denuclearization and the peace process. Until that happens, expect a bumpy ride.