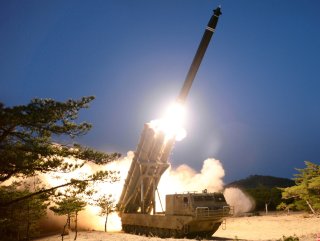 The North Korean government launched three missiles, likely including one intercontinental ballistic missile (ICBM), toward Japan on Thursday, leading to an alert on the main Japanese island of Honshu and evacuations in the prefectures of Miyagi, Yamagata, and Niigata.

Authorities in South Korea and Japan reported the launches early on Thursday morning. Japan’s NHK public broadcaster initially claimed that the missile had passed over Japanese territory and fallen into the Pacific Ocean to the east. However, the Japanese defense ministry later indicated that an analysis of the missiles’ location data had determined that they had not passed over Japanese airspace. On Thursday, Japanese prime minister Fumio Kishida declared that the missile launches had been a “violent action” against Japan and insisted that they would “not be permissible.”

Japanese defense minister Yasukazu Hamada announced that one of the three missiles had reached an altitude of higher than 1,200 miles—well past the Karman line, commonly regarded as the boundary of outer space—but had only traveled 466 miles east, falling into the Sea of Japan off the island nation’s west coast. Based on this analysis, Hamada indicated that particular missile had been a medium-to-long-range missile that could have been fired over Japanese territory with a different launch angle.

On Thursday, South Korea’s military reported that Pyongyang had fired the ICBM from the capital city at around 7:40 am and fired the other two missiles from the country’s eastern coast. It did not release further details on the missiles’ trajectory, and projected distance traveled.

North Korea’s last ICBM launch occurred in March. That missile reached a height of nearly 4,000 miles but also traveled only 600 miles east, falling into the Sea of Japan well before contact with the Japanese mainland. However, in the first week of October, Pyongyang fired an intermediate-range missile directly over Japan’s northern island of Hokkaido, leading the island’s residents to take shelter and prompting fierce condemnation from Japan, South Korea, and the United States. That missile traveled roughly 2,800 miles, the furthest distance of any North Korean missile test.

The missiles aimed toward Japan came after a launch of twenty-three other missiles on Tuesday, North Korea’s largest-ever single-day test. North Korean officials claimed ongoing U.S.-South Korean air drills involving 240 aircraft flying roughly 1,600 sorties provoked the missile launch. In addition to the pilots, thousands of soldiers on the ground have also been involved in the drills.

In recent months, the North Korean government has grown steadily more confrontational towards its Western-aligned neighbors in East Asia. In turn, both Kishida and South Korean president Yoon Suk-yeol have refused accommodation with Pyongyang and attempted to bolster the historically weak ties between their two countries and the United States.