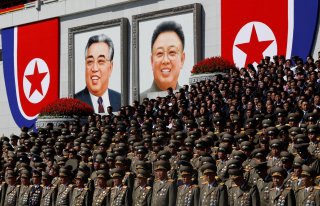 The question of potential instability and a possible power struggle came up when Kim Jong-il, father of the current leader, suffered a stroke and lapsed into a coma in 2008. Back then, North Korea kept his illness secret for weeks, and kept him out of the public eye for months.

The uncertainty back then sparked very real, very relevant questions about what might happen in this impoverished, nuclear-armed country where there was no clear chain of succession. And the stakes are even higher today, given the nuclear advancements Kim Jong-un has made as well as the even more fragile state of the North Korean economy under sanctions.

We should remember that North Korea was able to quietly tighten the cordon of security around his ailing father in 2008 and effectively restrict the flow of information in and out of the country as a way to avoid sparking panic at home as well to conceal his state of health to the outside world. That gave the regime time to put measures in place to ensure stability as well as to focus on a succession plan to groom Kim Jong-un and introduce him as the heir apparent. It wasn’t much time but it was enough to avert a crisis of instability when Kim Jong-ll died in 2011.

Some analysts have long predicted the collapse of the North Korean regime with a change of leadership. But I would say the system is stronger than we think, partly due to the fog of disinformation that the regime employs to keep its citizens in the dark. Uncertainty paralyzes them.

If Kim Jong-un were to fall ill or worse, we would see that same quiet tightening of security and the flow of information as we saw in 2008. Perhaps we are seeing that now. But we may not know immediately, and the inner circle would seek to conceal the true state of matters for as long as possible to buy time to maintain stability and put a succession plan in place.

Jean H. Lee is director of the Hyundai Motor-Korea Foundation Center for Korean History and Public Policy at the Wilson Center, and a veteran foreign correspondent who ran the AP’s Seoul bureau and opened the news agency’s Pyongyang bureau. Follow her on Twitter @newsjean.