How Donald Trump and North Korea Can Strike a Nuclear Deal 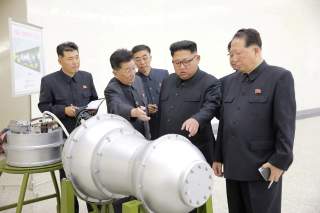 As the twelve days of Christmas end without the promised "gift" from Kim Jong-un, what does 2020 hold in store for Northeast Asia and U.S. security policy in that key part of the world?  And what does Kim's recent major speech, more or less an annual tradition and delivered just before New Year's this year, suggest by way of hints and clues?

First, a quick review.  The situation in Korea is roughly as follows today.  In one of international politics' great oxymorons, the demilitarized zone or DMZ that separates the two Koreas also runs through the most densely militarized region on Earth; roughly one million troops from North Korea and South Korea still straddle it. Most of America’s 30,000 troops on the peninsula are south of Seoul.  Even though South Korea’s own defense budget as a percent of GDP is the highest among all U.S. treaty allies, President Donald Trump's administration continues to demand a massive increase in what South Korea pays for American troops there. Another 200,000 American civilians live in Seoul and other parts of the country.

Meanwhile, largely as a result of international sanctions imposed after North Korea's nuclear and missile tests of 2016 and 2017, the North Korean economy remains in recession, with the latest estimates by South Korea's Central Bank showing annual GDP contraction of 3 to 4 percent a year since then. That is despite the imperfect enforcement of sanctions by the likes of China and Russia. President Donald Trump rightly walked out of his second summit with Kim, in Hanoi in February, when the North Korean dictator demanded a near-complete lifting of sanctions in return for a shutdown of North Korea's main nuclear production site (and no surrender of any of North Korea's actual nuclear warheads, which likely number 30 to 80 by now). Trump and Kim have maintained a veneer of personal warmth ever since, and met one more time briefly near the DMZ in the spring--but official talks have gone absolutely nowhere. Trump touts his overall diplomacy towards Kim as a major success. While it is true that North Korea's two-year moratorium on nuclear and long-range missile tests counts for something, it is increasingly hard to sustain the argument that policy is succeeding as other types of missile tests take place, and as the North's nuclear arsenal almost certainly continues to grow. Meanwhile, much worse could be in store—another ICBM missile launch (perhaps in the guise of putting a satellite in orbit), or a nuclear test, or maybe a lethal attack on innocent South Koreans in the style of what Mr. Kim's father and grandfather used to do.

On the Kim speech, much of the mainstream media reporting has emphasized the belligerent, threatening side of the speech--which is, to be sure, important. Kim cast doubt as to whether he would continue the ICBM and nuclear testing moratoria much longer, and suggested as well that North Korea might soon test or deploy a new strategic weapon of some sort. These warnings were likely directed at foreign governments, including Washington's.

But Kim also spoke to his own people. Building on the "byungjin" concept by which North Korea has promised to develop its military/nuclear capabilities and its economy at once, he suggested that pursuit of the former might now require some delay in the latter.  He spoke of a need for belt-tightening and autarky, since there is little sign now of sanctions being lifted anytime soon.

I read the sum total of Kim's messaging as looking for more negotiating leverage at every turn. He is making threats while also suggesting that his country is hunkering down--tough enough to withstand whatever comes its way.  He is intent on not coming across as weak, on not reinforcing the Hanoi message that somehow he is in a subservient position in any future talks. In short, he is probably still looking for a deal with President Trump and others in 2020--but a deal on his own terms.

Meanwhile, the Trump team seems unsure of how to proceed.  Even after John Bolton's departure as national security advisor, hard-line factions insist on complete, irreversible, verifiable, and fairly immediate nuclear disarmament--meaning an elimination of Kim's warheads as well as the infrastructure he uses to make more (probably located at 3 to 5 sites around the country).  Only then would sanctions be lifted; according to Trump, the United States would also then help North Korea build a modern economy.

If Kim has any fear of Trump authorizing a military attack because of a breakdown in talks, he probably fears, even more, a world in which he faces the United States and South Korea without having the bomb.  Scholars like Jonathan Pollack and Jung Pak have also documented the importance of North Korea's nuclear program to the entire Kim family, since it began under the nation's founder Kim Il-Sung and first produced warheads under Kim Jong-Il (the current leader's grandfather and father, respectively). These warheads are quite literally the regime's crown jewels. The young Kim would be betraying his family legacy to give them up lightly.

Other factions in the Trump administration seem more pragmatic about how to envision a deal.  Deputy Secretary of State, and top North Korea negotiator Steve Biegun has said that "North Korea need not do everything before we do anything."  However, the specifics of such a more flexible approach have not been evident.

As a new year dawns, it is time for Washington to decide on a strategy.  If Mr. Trump wants to sustain his claim to a North Korean success, he cannot leave this increasingly failing policy on autopilot.

Even Democrats should be cheering for success here, given the possible alternatives. Former Secretary of Defense Jim Mattis rightly warned that, if war ever occurred against a nuclear-armed North Korea, it could be the worst thing the planet has witnessed since the world wars. Indeed, with Seoul's teeming metropolis of some 25 million within easy artillery and missile range of North Korea, fatalities could quite literally range well into the millions should all-out war result (perhaps the ultimate result if a breakdown in negotiations led to an American preemptive strike against a North Korean missile launch site or nuclear production facility--measures that have been considered by several U.S. administrations in the past). Democrats worried that such an achievement would help Trump politically should feel reassured that foreign policy successes do not easily translate into reelection. The first President Bush lost to Bill Clinton in 1992 after the fall of the Berlin Wall, Operation Desert Storm, and the dissolution of the Soviet Union all occurred on his watch.

In seeking a strategy, Mr. Trump is in a tough spot. No American administration has ever thought it acceptable to recognize North Korea's nuclear capabilities, and nor should he. In addition, Trump’s constant railing against the Obama Administration's Iran nuclear deal makes it hard for him to brag about any deal with Kim that falls short of complete denuclearization. Yet there is still a logical path ahead.

In my view, the United States, along with South Korea and other nations, should agree to suspend and eventually lift most U.N. sanctions that severely crimp North Korea's trade with its neighbors.  It is these sanctions, more than any other measures (besides North Korea's own mismanagement of its economy, of course), that have done the real damage in recent times.

But sanctions relief should occur if, and only if, North Korea verifiably dismantles the entirety of its nuclear production infrastructure (after submitting a declaration or database on those facilities that we can check against U.S. intelligence estimates). Such a deal would permanently cap the North Korean arsenal at its current size, or less. The accord should also make the testing moratoria official and permanent. This measure would cap the quality and sophistication of North Korea's long-range missiles and nuclear arsenal as well. North Korea could keep most of its warheads for now--and the United States, to retain leverage for future negotiations someday, would keep its own sanctions in place. Most American trade and aid and support for World Bank/IMF help would be withheld; so, presumably, would Japanese and EU support.  Whether a second deal that achieved true disarmament happened anytime soon or not, the parameters of such an accord would achieve limitations on North Korea's nuclear and ICBM capabilities that no previous American president has managed to establish. A low-key declaration of an end to the formal state of war that has existed on the peninsula since the 1950s, and an opening of liaison offices between both Koreas and the United States, could be part of the understanding as well.

I believe Kim's speech suggests a willingness to negotiate on these sorts of terms. But of course, we will only find out if we give such an effort a serious try.

Michael O'Hanlon is the Senior Fellow and Director of Research of the Foreign Policy Program at The Brookings Institution. He specializes in U.S. defense strategy, the use of military force, and American national security policy.