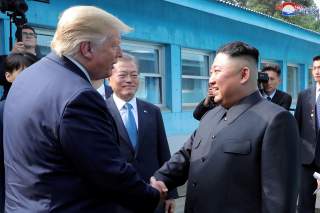 The United States and North Korea will finally sit down for nuclear talks on October 5, according to an announcement by Pyongyang. Three months had passed without negotiations despite a handshake in June between U.S. President Donald Trump and North Korean leader Kim Jong Un, at the Demilitarized Zone (DMZ) separating the two Koreas, to resume working-level talks. North Korean First Vice Foreign Minister Choe Son Hui finally proposed on September 9 that the two sides meet at the end of the month, but, until now, Pyongyang had been “negotiating” through the media rather than discussing possible dates directly with its American counterparts for a meeting. It had praised Trump for suggesting he would try a “new method” with Pyongyang, as it had been demanding a “new calculation” from Washington for negotiations since the no-deal Hanoi summit in February. However, Trump’s remarks were made in the context of differentiating between the so-called Libya model, which North Korea sees as a formula for its demise: giving up nuclear weapons leads to the death of their leader.

More concerning is North Korean commentary framing the upcoming talks publicly as “preparations for a summit statement agreement.” This throws into question whether negotiators will be able to engage in any credible negotiations on the nuclear issue yet again. North Korean envoys were not given any room to discuss this core topic ahead of the past two summits, claiming it was for Kim to decide. This resulted in a vague leaders’ statement in Singapore and no agreement in Hanoi. Upping the ante, Pyongyang publicly warned on September 16 that it would discuss denuclearization only after “threats and obstacles” to their country are removed.

Negotiating with a country like North Korea involves many twists, turns, and delays. It also operates on an exponentially longer time scale while Trump has just over one year to achieve meaningful results before the next presidential elections, and South Korean President Moon Jae-in has about three years to establish peace on the Korean Peninsula. Trump may very well be the only American president who is willing to deal directly with Kim and provide massive benefits in unconventional ways, but Pyongyang so far continues to follow its old negotiating playbook instead of boldly rolling the dice to test Washington directly through meaningful negotiations.

Washington and Pyongyang also have yet to agree on what denuclearization and peace entail and to design detailed pathways that achieve the three key pillars of the 2018 Singapore statement: new relations, peace regime, and complete denuclearization. Negotiations must be allowed to function properly in order to begin drafting a real agreement—a comprehensive one that includes all outstanding issues including regional, non-nuclear ones—that stipulates concrete action plans and timetables for every bargain along the way. It is important that bargains are made proportionately.

If and when substantive negotiations take place, any comprehensive agreement (or smaller deal(s) to kick start the process) will require proportionate “horse trades” so that Washington does not give away high-value concessions too soon without Pyongyang working for them. Or else, the U.S. risks losing leverage quickly during negotiations and North Korea pocketing early gains and walking away from the process without taking significant steps towards denuclearization. Pyongyang will be most interested in ultimately receiving both economic gains and security guarantees from Washington—it will likely tactically choose which one to ask for depending on the state, mood, and trajectory of negotiations.

The Trump administration has stated that it will not lift sanctions until after denuclearization. The rationale behind this position is to maintain pressure and retain incentives for denuclearization, especially because the post-2016 UN Security Council sanctions Pyongyang wants lifted are aimed at drying up nearly $3 billion in annual revenue that fund its nuclear weapons program. This was the basis for rejecting Pyongyang’s demand to lift these sanctions in exchange for only its Yongbyon nuclear complex. If the administration continues its current sanctions position, it will need to decide what technological milestone constitutes “denuclearization” that deserves sanctions relief: Is it after all weapons and facilities are dismantled, or after all materials, weapons, and facilities are removed from North Korea? Or can Washington begin to lift some sanctions in phases once all North Korean nuclear weapons programs are offline and disabled?

While the administration’s position on sanctions is the right one in principle, it will still need to offer some rewards to Pyongyang as an incentive to embark on and continue advancing toward denuclearization. Instead of removing sanctions, the U.S. should provide time-bound exemptions and waivers on humanitarian assistance and projects, starting with inter-Korean humanitarian projects, in return for proportionate North Korean denuclearization measures. Washington should even consider a time-bound exemption on one of the UN sanctions, such as textiles. Providing exemptions and waivers are prudent because sanctions will be difficult or impossible to “snap back” for noncompliance once they are lifted, as China and Russia would veto the move at the U.N. Security Council. South Korea’s progressive Moon Jae-in government would also be hesitant to reinstate sanctions, particularly in the absence of a major North Korean provocation. While time-bound sanctions exemptions and waivers would be a reasonable approach for Washington, there is always the chance that Pyongyang would prefer much higher-value concessions on the economic and political front or bigger-ticket items like security guarantees.

As a basic rule of thumb, Washington should still categorize and carefully sequence its concessions (or “corresponding measures”), which require an understanding of their relative significance. Value-based metrics should be used in determining appropriate bargains by categorizing both U.S. and North Korean measures (“concessions”) along a spectrum of modest-, medium-, and high-value rewards. Trades should be made between modest U.S. concessions and modest North Korean concessions, and in the same manner for their medium- and high-value benefits.

One way to categorize U.S. and North Korean measures is according to their degree of strategic and political importance as well as reversibility. Using these two criteria, modest U.S. benefits could include providing humanitarian assistance (excluding critical vaccines that should not be linked to denuclearization or politics), declaring that the United States has no hostile intent, and declaring the start to a process that will announce a formal end to the Korean War. Washington could also consider allowing sanctions exemptions for inter-Korean humanitarian projects and for ad hoc, time-bound, volume-restricted imports of necessity items, such as oil, for the welfare of the North Korean people, as modest concessions. High-value U.S. benefits for North Korea would include a peace regime, full diplomatic relations with embassies, and the gradual lifting of all U.N., EU, South Korean, Japanese, and eventually U.S. sanctions in a phased manner.

For the United States to engage in proportionate bargaining, it can apply the same metrics to North Korea’s denuclearization steps (as well as for Pyongyang’s illicit trade and proliferation programs and other/non-traditional WMD programs). Modest North Korean steps would include inspections at Yongbyon, an initial declaration of all fissile-material production facilities anywhere in North Korea, and no nuclear and missile tests. “Missiles” should include all classes, not just inter-continental ballistic missiles. High-value steps would include the verified dismantlement and removal of all nuclear and missile programs. 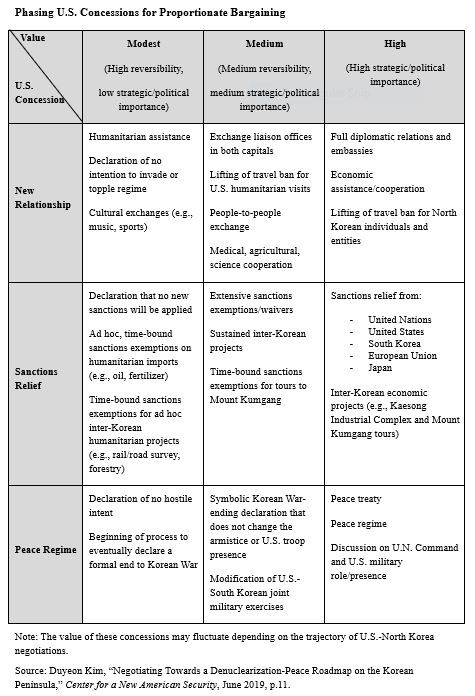 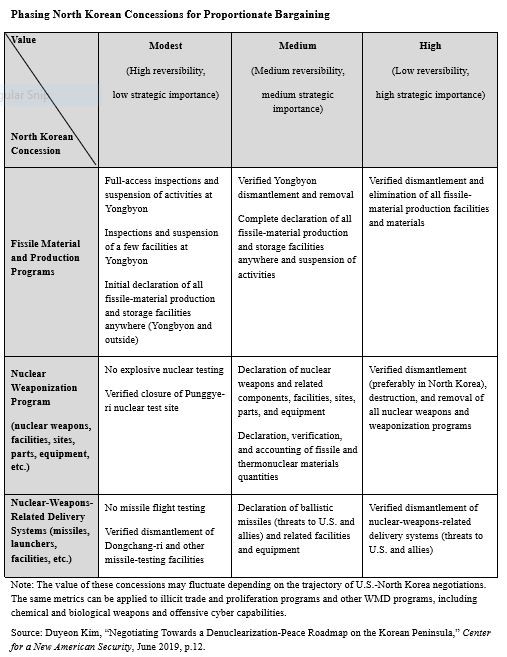 Even if the two sides engage in proportionate bargaining, Washington will still be faced with many challenges. Negotiations would not end with an agreement on a comprehensive roadmap or mini deals; they would have to continue throughout the implementation of any agreement(s). Pyongyang enjoys using salami-slicing and delay tactics to extract as many concessions while retaining their nuclear weapons for as long as possible.

Any verification measures (scope, type, experts, method, etc) will be subject to an agreement(s), which also entail constant negotiations. Verification will become the most daunting battle because transparency is fatal to the tightly-controlled North Korean regime. Discrepancies are commonly found in any initial declaration of nuclear stockpiles and programs, even for the most cooperative countries like South Africa, but blaming and shaming Pyongyang during the verification process will do more harm than good. Verification, and the entire denuclearization process, should be conducted in a cooperative manner in which North Korean experts and personnel are involved in the process with American and international experts.

A good outcome within Trump’s current presidential term would be to, at the least, verifiably halt (perhaps even begin to roll back, if possible) all of North Korea’s fissile material production programs as the first step in implementing a comprehensive denuclearization-peace roadmap, which also needs to be negotiated. Any mini deal to begin denuclearization—or to provide the American public with some confidence such as dismantling a limited number of nuclear weapons as a token gesture—should still be connected to a comprehensive agreement (or “roadmap”) that states the final destination. Negotiating the peace track in the roadmap will require the formal participation of Seoul and Beijing, and eventually include Moscow and Tokyo in roadmap discussions because of their roles in providing Pyongyang with various types of assistance and their stakes in the final outcome.