How North Korea Could Exploit Russia's War Against Ukraine 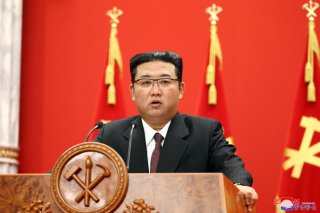 The war in Ukraine is absorbing Washington’s attention and resources, leaving it able to do little else. However, North Korea is once again attempting to force its way into the national conversation. Or instead, Pyongyang is counting on Ukraine to divert America’s attention from its continuing missile and nuclear programs. It’s difficult to discern which is true, but much might depend on the answer.

Russia’s threats against and subsequent invasion of Ukraine wiped most other international news from the front pages of the newspapers. Although long an apparent publicity hound, Kim Jong-un disappeared into the media black hole. For the first time in many years, nuclear Armageddon seemed to threaten Europe rather than Northeast Asia, courtesy of Moscow’s nuclear alert.

Then the Democratic People’s Republic of Korea (DPRK) launched another ballistic missile. Although only a short-range shot, it followed a flurry of seven tests of nine missiles in January. The hiatus was likely to avoid embarrassing China during the Olympics.

All parties played their predictable roles. Outgoing South Korean president Moon Jae-in called the launch “deeply worrisome and regrettable” and held a national security council meeting. One sensed his personal frustration at the collapse of inter-Korean dialogue when his office criticized the North’s action “despite our patience and the joint efforts by us and the United States to find a diplomatic solution.”

At the same time, the DPRK reaffirmed its relationship with its major patrons, China and Russia. After the end of the Beijing Olympics last week, Kim offered his congratulations to China for having overcome an “unprecedentedly severe health crisis and the hostile forces' maneuvers.” He said the two governments were “frustrating the undisguised hostile policy and military threat of the U.S. and its satellite forces.” No Chinese response was reported, but more important was its continued silence in the face of multiple missile tests. The bilateral relationship remains much closer than before the flurry of Kim-Xi summits began in 2018.

The DPRK also supported Russia in its invasion of Ukraine. The North Korean Foreign Ministry posted a commentary which claimed that “the basic cause of the Ukraine incident lies in the high-handedness and arbitrariness of the United States, which has ignored Russia’s legitimate calls for security guarantees and only sought a global hegemony and military dominance while clinging to its sanctions campaigns.” The assessment went on to accuse Washington of “double standards” and “arrogance,” both of which are familiar criticisms. Although Pyongyang has relations with Ukraine, Moscow’s role in helping to bust sanctions is undoubtedly more important to Kim at the moment.

The common policy assessment is that the North is seeking Washington’s attention. After all, the DPRK seemed well down the list of Biden administration priorities last year, with its emphasis on domestic issues, forced attention to political challenges, and international focus on Afghanistan, China, and Iran. And then came the Ukraine crisis, which has become almost all-absorbing.

This is a plausible thesis, but it will take more than a few short-range missile tests to get a hearing from the Biden administration. More important, so far there is no indication that Kim wants contact with Washington. The DPRK ignored several administration efforts to engage last year. That followed an almost complete foreign disconnect after the failed 2019 Trump-Kim summit in Hanoi. The North also ended ties with Seoul.

More likely is the opposite possibility, that the North hopes to avoid challenge from America as it moves ahead on the weapons wish list that Kim previously presented. The DPRK’s objective is to enhance its security and leverage. By increasing the quality and quantity of its nuclear arsenal, the North would increase both its deterrent capabilities and bargaining position, allowing it to retain a sizable weapons stockpile while pushing to lift sanctions.

Pyongyang might have decided that this is a perfect time to forge ahead because the Biden administration is preoccupied, most recently by the Ukraine imbroglio. The latest short-range test caused barely a peep in Washington. Focused on punishing Russia and perhaps still hoping to separate Beijing from Moscow, the administration is unlikely to impose any significant new sanctions or other initiatives involving North Korea.

More challenging is the possibility of Pyongyang returning to test long-range missiles and nuclear weapons, in abeyance, respectively, since November and September 2017. Although there is no indication that any such tests are planned, the regime has suggested that it will end its voluntary moratorium. Moreover, some analysts view the intermediate-range missile test in January as presaging an ICBM launch. The North’s deterrent won’t be complete until it is able to target the American mainland. Kim’s challenge is to finalize that capability without triggering a reprise of Donald Trump’s “fire and fury” campaign.

Kim Jong-un might have decided that now is the opportunity. Observed Evans Revere, formerly of the State Department: “The North Koreans may think Washington is distracted and stretched by the Russian invasion and will not be able to respond vigorously, or at all, if the DPRK resumes testing of longer-range missiles.” Moreover, even if displeased by such a test, neither Beijing nor Moscow seems currently disposed to support additional sanctions or increase enforcement of existing ones. With Washington at such odds with Russia, the administration will have little leverage against China, especially if Beijing threatens to provide sanctions-busting assistance to Moscow.

Moreover, the Republic of Korea will soon face a governmental transition. If the ruling party triumphs, the new administration will likely oppose a harsh response even to renewed ICBM or nuclear testing. If the opposition wins, little action can be expected before the new government takes over and officials are appointed. Washington might be reluctant to act during that time.

Whatever its plan, the DPRK has the initiative. It always moves on its own timetable, but it might decide that the Ukraine crisis offers useful cover while it ramps up its testing program. The Biden administration might then find itself facing two simultaneous foreign crises and a looming mid-term election.

North Korea’s latest missile test provides a reminder that the Biden administration will enjoy no let-up in other foreign challenges as the Russo-Ukraine war threatens Europe’s peace. Kim told a gathering of the Workers’ Party of Korea in December that “the military environment of the Korean peninsula and the trend of the international situation getting instable day after day demand that bolstering the state defense capability be further powerfully propelled without a moment's delay.”

This suggests that even more, and perhaps more provocative, tests will be forthcoming. And the Biden administration’s next big foreign policy test is already brewing.