How to Prepare for a Third U.S.-North Korea Summit 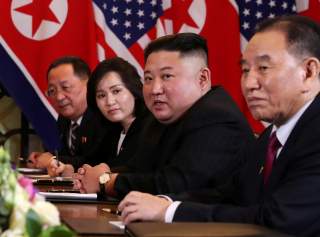 After the abrupt termination of the second summit held between U.S. President Donald Trump and North Korean leader Kim Jong-un on the nuclear issue in late February, the latest word is that Trump is tentatively opening the door to a possible third summit.

The message came in the wake of Kim Jong-un’s remarks regarding the sanctions on his country, and the need to deal a “serious blow” to those hostile forces that are imposing them. Yet while Kim is clearly unhappy with the continued economic pressure on his country, it is notable that he did not threaten to enhance his nuclear capability, nor did he threaten the United States directly. In fact, the “serious blow” he referred to was the strengthening of North Korea’s self-reliant economy. And shortly thereafter he said he was willing to meet with Trump again, but only if the United States changes its approach and gets serious about its proposal to North Korea by the end of the year. This is in contrast to Kim’s threat in November 2018 to restart his nuclear program if the United States does not lift sanctions, and it is in contrast to his January 2019 threat to take a “new path” toward the United States if it does not lift sanctions. This implies that North Korea is keeping the door open to dialogue after Hanoi and that the Trump administration could have more leverage in such a dialogue, because Kim is demonstrating that he is cautious about directly antagonizing the president. Trump’s leverage seems to have been strengthened at the Hanoi summit, when Kim realized that the U.S. president was willing to walk away from the meeting without a deal.

Nevertheless, whether a summit will take place or not is still an open question given additional North Korean statements that blamed Secretary of State Mike Pompeo for the collapse of the Hanoi talks and determined that he should not be part of any further dialogue. They also dismissed National Security Adviser John Bolton as “dim-sighted” in light of his interview to Bloomberg where he maintained that there would be no possibility of a third summit before North Korea provided “real indication” that they had made a strategic decision to give up nuclear weapons. Bolton’s remark was deemed “nonsense.” And Kim insists he is willing to hold a third summit only if the U.S. changes its stance on enforcing sanctions by the end of this year, and if it approaches North Korea with a “new calculation.” He has presented this as a kind of ultimatum. Moreover, Kim is attempting to put some additional pressure on the administration by test firing a missile, although the test did not violate the moratorium on testing because it was not a long-range missile nor was it connected to the nuclear realm.

A further development that has been thrown into the mix is the meeting between Kim Jong-un and Vladimir Putin which took place at the end of April in Vladivostok. Of note is the fact that Putin’s message to Kim was basically one of support for his efforts to conduct dialogue with the United States. He hoped to play a role in getting dialogue back on track but according to reports he was cautious not to appear to be suggesting that he and Kim should forge a separate policy. Russia also wants to see full denuclearization on the Korean Peninsula, but Putin mentioned the need for international security guarantees for North Korea in order for that to happen. The summit was important for Kim in order to demonstrate that he has additional allies, and for Putin to demonstrate that he has a role to play in the overall dynamic. But at the end of the day, this has always been a primarily U.S.-North Korean show, and that has not changed. For years North Korea has sought direct bilateral negotiations with the United States. As such, the meeting had minimal impact, and was mainly orchestrated to remind everyone that Putin should not be ignored, and that Kim has additional support.

The current challenge for the United States in looking toward a possible third summit is how best to use the leverage that it has gained in an effective manner—to ensure that a summit takes place and that it achieves a concrete result, despite the formidable constraints and hurdles. Given the current incompatibility of positions, and the fact that a full compromise is unlikely, what the Trump administration and the North Koreans need (if they want to demonstrate progress) are realistic and achievable goals. This will help them secure a tangible success and to keep the process of tension-reduction alive.

By this stage it should be clear that denuclearization of North Korea is not a realistic goal at the present time, and it is important to recognize this dismal reality in order to advance a more realistic approach. This certainly does not mean losing denuclearization as the ultimate end goal, or caving to North Korean demands. Instead, it entails introducing a necessary modification of the U.S. approach so as to increase the prospect of achieving something concrete while sustaining the process itself. The required modification is recognition and acceptance of the fact that the process vis-à-vis North Korea will necessarily be a phased one. Moreover, trying to secure agreement now on the precise sequencing until full denuclearization would be wasted time. The process will have its own dynamic moving forward, and not everything can be settled in advance.

The Trump administration—like the administrations that came before it—is currently unwilling to consider a phased approach. It wants the full deal: complete North Korean denuclearization in return for the lifting of sanctions. But step-by-step progress is the way arms control has proceeded in other arenas, when the relevant states had already achieved the status of nuclear states. The many mistakes of the past that enabled North Korea to cross the nuclear threshold cannot be corrected at this late stage, and the challenge now is to move the process forward in the face of this troubling reality.

A first step in a gradual process toward achieving the common goal of denuclearization could be to stop North Korean exports of nuclear and missile technology and equipment in exchange for some sanctions relaxation. Beginning the process by focusing on North Korea’s role as a provider of nuclear and missile technology to additional states—an aspect of North Korea’s program that has serious proliferation implications but does not immediately target its capabilities—would follow the logic of many arms control processes: begin with what you can begin with, build confidence, and then move on.

The advantage of such an agreement would be three-fold. It would demonstrate a concrete achievement, which is critical after the failure in Hanoi; it would keep this important bilateral process alive; and it could serve as a concrete confidence-building measure for both sides.

The harsh lessons regarding what happens when a state is not prevented from crossing the nuclear threshold can at this point only be applied to other nuclear proliferators like Iran—and perhaps Saudi Arabia down the line. In this regard as well, stopping North Korea’s proliferating activities would be a worthy first achievement for the nascent bilateral U.S.-North Korean dialogue.

Shimon Stein is a senior research fellow at the Institute for National Security Studies (INSS) and a former Israeli ambassador to Germany (2001–2007).