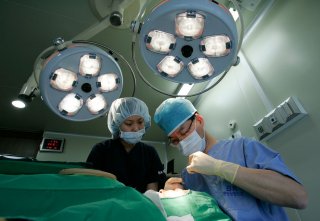 Medical tourism, or the practice of traveling abroad to receive medical treatment, has become a prominent global phenomenon over the past several decades. The potential reasons for medical tourism are manifold: lower-cost care, superior care, circumventing waitlists at home, access to experimental treatments that are banned in your country, and the opportunity to combine treatment with vacation. With its emphasis on sophisticated bioinformatics and extensive expertise in a wide array of specialized procedures, South Korea’s health industry is ideally positioned to reap the windfall from the ongoing boom in medical tourism.

Plagued by low participation rates and infrastructure deficiencies throughout the mid-twentieth-century, South Korea’s healthcare system emerged from a program of ambitious insurance reforms in the early 2000’s as one of the world’s best. According to the OECD’s index of aggregate health statistics, ROK has been a consistent leader in survival rates for colon and cervical cancer; it likewise boasts some of the world’s lowest death rates for hemorrhagic and ischemic strokes.

No less saliently for many health tourists, South Korea has leveraged its strengths in high technology to become a powerhouse in skin and plastic surgery. From nose jobs to jawline corrections, South Korea is home to dozens of internationally-acclaimed plastic surgery clinics— some of these, such as JK Plastic Surgery Center, aggressively market themselves to foreign customers. Visitors to JK’s website are greeted by an infographic claiming that they’ve served patients from 100 countries. Many of their operating procedures, including multi-language agreements and on-site service in the patient’s language, are tailored to reflect the fact that over 70% of their patients are medical tourists.

Unlike some of its competitors in other medical tourist destinations like India and the Dominican Republic, JK’s boasts are backed by governmental authority. JK was one of four Korean hospitals to be designated as a “foreign patient attracting medical facility” by South Korea’s Ministry of Health and Welfare in 2017, meaning that it received a green light in 130 different categories ranging from multilingual accessibility to general patient safety. Not only do foreign patient attracting medical facilities get to claim state certification for advertising purposes, but they also gain access to a government grant.

Accreditation barely scratches the surface of the extensive public-private partnerships that give South Korea’s medical tourism industry its competitive edge. The government has taken steps to simplify the process of applying for long-term medical visas, while tweaking regulations to make it easier for South Korean medical institutions to collaborate with foreign hospitals. It was estimated in 2018 that the government spends $1 billion per year to attract medical tourists. Given the geographical considerations that factor into medical tourism, it’s no surprise that the preponderance of South Korea’s foreign patients are from neighboring Eurasian countries; data collected in 2016 shows that the lion’s share hails from China at around 130,000 patients, followed by Russia, Japan, Mongolia, and a handful of Central Asian states. Despite the challenges posed by long travel distances, ROK received almost 50,000 American patients that same year.

A relative newcomer to the medical tourism industry, South Korea has established a well-earned reputation for reliable service at competitive prices. While plastic and skin surgery remains South Korea’s largest medical tourist attraction, internal medicine occupies a respectable and growing 20% share of ROK’s foreign medical procedures. ROK is projected to become a “top 3” player in the medical tourism market by 2027, driven in no small part by the record of consistent innovation stemming from Korea’s technology sector.