How Will Coronavirus Impact an Election? South Korea Could Give Us a Clue. 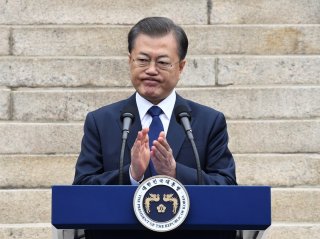 South Korea is due to go to the polls in two weeks. On April 15th, all 300 members of the National Assembly will be elected. This will be one of the first major elections to be held anywhere across the world amidst the COVID-19 pandemic. How will it affect the outcome of the election?

The election is crucial for President Moon Jae-in. A good result for the ruling and liberal Democratic Party of Korea would reinforce Moon’s position during the final two years of his five-year term in office. A victory for the opposition and conservative United Future Party, in contrast, would effectively make him a lame-duck president.

Last week’s polls brought welcome news for Moon and the Democratic Party. Gallup Korea put the president’s approval rating at 55 percent. Realmeter puts it at 52.5 percent. Both are highs not seen in over a year. And the main reason is the president’s and his government’s handling of the coronavirus crisis. Indeed, in a recent survey from the Korea Press Foundation, 74.4 percent of respondents had a positive evaluation of the government’s response to the crisis.

The Democratic Party itself has maintained a healthy lead over the United Future Party, and its conservative predecessors, for years. The latest Gallup Korea poll puts this lead at 15 points. This is partly the result of the disarray in which the conservatives have been since the impeachment of former president of Park Geun-hye, even if their projected voting share has gone up from the lows of 2018.

But the government’s handling of the COVID-19 pandemic has surely aided the Democratic Party by helping it project the image that it is a safe pair of hands.

For South Korea seems to have learned from the mistakes of the MERS outbreak that hit the country in 2015. A total of 38 people died, the largest toll outside of Saudi Arabia were the outbreak started.

Back in 2015, the Ministry of Health and Welfare withheld information from both the public and hospitals. Testing was slow, and tracing of infected patients and their contacts patchy at best. Hospitals became a transmission route due to their inadequate facilities to treat MERS patients. The South Korean public was very critical of the government’s response to the crisis. The health and welfare minister was removed from his post.

In contrast, South Korea’s response to COVID-19 has been marked by speediness, coordination and transparency.

Tens of thousands of tests have been carried out on a daily basis, with results usually provided within hours. Aggressive contact tracing has served to swiftly identify infected patients and hotspots. This has led to early treatment, thus reducing the mortality rate to around one percent of confirmed cases. Information about COVID-19 has been centralized so it can be accessed by health professionals across the country. In other words, the government has shown competence.

Transparency has also been central to the government’s response to the crisis. Moon has been busy chairing meetings and touring medical and other facilities. Different members of the government have been offering daily briefings. Government officials have warned against complacency, making clear that the pandemic will take months if not longer to come under control.

The result is that South Korea has been touted as an example of how to deal with the coronavirus pandemic and ‘flatten the curve’ to slow down its spread. Indeed, South Koreans overseas are now going back to their country to escape seemingly uncontrolled outbreaks in the U.S. and most of Europe.

This bodes well for Moon as the date of the National Assembly election approaches. The Cho Kuk scandal now feels like old news, even as the trial of the former justice minister begins. Stalled diplomacy with North Korea seems like an afterthought. Pyongyang’s missile tests have become routine again, barely eliciting any response from the international community.

Moon and his Democratic Party, however, can hardly afford to be complacent. A day is a long time in politics, never mind two weeks. South Korea is not out of the woods with the COVID-19 pandemic; cases could spike again. Some other political scandals might emerge between now and the day of the election. Economic figures are due to suffer from the coronavirus outbreak.

Meanwhile, a new electoral system designed to more fairly reflect the vote share has made predictions about the outcome of the election more difficult. The system is meant to boost the seat numbers of smaller parties. Its effects on the bigger Democratic and United Future parties are difficult to predict.

Moon and the Democratic Party, therefore, cannot be assured of a plurality of seats in the National Assembly. Not to mention a majority, given the new electoral system.

The government’s response to the COVID-19 pandemic, however, has so far boosted Moon’s fortunes. If the situation continues to be under control, the government’s competence and transparency could well prove a vote winner.

Dr. Ramon Pacheco Pardo is Reader (Associate Professor) in International Relations at King's College London and the KF-VUB Korea Chair at the Institute for European Studies of Vrije Universiteit Brussel (IES-VUB). He is also the Co-director of the London Asia Pacific Centre for Social Science.