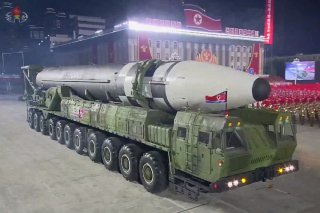 Last weekend’s midnight 75th-anniversary celebration of North Korea’s ruling Workers' Party was about as boisterous as expected. There were tens of thousands of happy subjects clapping for North Korean leader Kim Jong-un, an impressive dance that was masterfully choreographed, and patriotic music blaring from the speakers. And there was the characteristic weapons display, where the world’s largest liquid-fueled intercontinental ballistic missile was paraded for the entire world to see.

The new defense systems received instant buzz from weapons analysts around the world. The new ICBM, reportedly a bigger version of the Hwasong-15, dubbed the Hwasong-16 by many analysts at least for now, may have the capacity to hold as much as triple the payload. As one well-respected U.S.-based analyst tweeted shortly after the parade, "North Korea potentially developing a huge solid fuel ICBM would be a big deal,” the next potential missile advance the Kim regime could be considering, and the one many analysts were waiting for during this weekends parade. Another observer of Pyongyang’s military called the new missile “a monster” that could increase the risk to the continental United States.

The discussion thus far has centered on the exact specifications and capability of the new ICBM. A national security threat, however, is not measured strictly by assessing the capability of a weapons system. U.S. policymakers must also focus on intent. What’s the purpose behind Kim Jong-un’s new ICBM? Is he planning to use them?

Neglecting to analyze intentions not only glosses over the big picture—it also adds a sense of urgency, if not alarmism, but that may also only heighten tensions.

So much attention has been paid to the ICBM rollout that Kim Jong-un’s own remarks have gotten short-shrift. After bragging about Pyongyang’s military advancements during his nearly decade-long rule, Kim sought to reassure those inside and outside North Korea who were watching that he had no intention of being the first to fire a shot. "We clarify that our war deterrent is being developed not for aiming at others," Kim said. "We are developing it in order to defend ourselves."

Naturally, the United States can’t simply accept Kim’s word. The U.S. has over 28,000 troops stationed in South Korea and over 50,000 additional troops based in Japan. All of these soldiers are vulnerable to North Korea's short and medium-range ballistic missiles. In the future, the North could attach a nuclear warhead to some of those shorter missiles—if they already haven't. Nor should the U.S. take lightly the Hwasong-15, an ICBM Pyongyang successfully tested in November 2017 which could allegedly hit any target in the continental U.S.

Yet the fundamental issue is not what North Korea can do with its missiles, but what it actually plans to do with them. Would Kim Jong-un give the order to launch a nuclear-armed ICBM towards the United States? Or even using some of his short or medium-range weapons in other scenarios, say against South Korea or Japan?

Right now, such a question is hypothetical—and it will remain that way, for now. It’s difficult to picture what Kim Jong-un or any North Korean leader for that matter would gain from endorsing such an extreme position. While Pyongyang could inflict considerable damage in a prospective conflict on the Korean Peninsula in a war (hundreds of thousands of casualties could very well be a conservative estimate), what exactly would be the point? Reunify the Korean Peninsula under the North’s banner? Highly unlikely. Scare the U.S. into withdrawing from the region as a whole? This, too, is highly improbable, particularly if Americans die in a North Korean artillery bombardment or if a U.S. military facility is on the receiving end of a North Korean missile, mortar, or projectile. Regardless of the scenario, any military action Kim Jong-un takes would usher in a series of events culminating in the utter destruction of his family dynasty. If self-preservation is North Korea’s ultimate concern, it's hard to see how courting an existential crisis with the world’s most powerful military squares with this objective.

Unfortunately, there are circumstances where Pyongyang could pull out the big guns and escalate to a nuclear level. If Kim Jong-un is convinced that Washington has settled on a policy of forceful regime change or is determined to execute an imminent military operation against his government, he may be compelled to use the nuclear arsenal he and his father have spent decades building. This is one of the main reasons why President Trump and Kim’s war-of-words in 2017 was so dangerous—and why consistent, systemic dialogue between Washington and Pyongyang at the working and senior levels is advisable.

But barring a U.S. military attack or the perception of one, the North Korean leadership has very little incentive to deploy its flashy news toys against the U.S. or its allies. Kim Jong-un may be spending top dollar on a military modernization program. But unless he has a death wish for himself, his family, and the dynasty he inherited, Kim can’t afford to use any of it.

North Korea, a Nuclear Weapons State with a New ICBM. Why So Shocked?