ICBM Firing, Nuclear Weapons Test or Wait: What Will North Korea Do For the Rest of the Year? 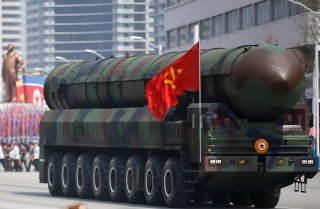 The lack of progress on U.S.-DPRK dialogue has hindered any traction on moving towards the denuclearization of North Korea. Whilst Kim Jong-un continues to exchange letters with President Trump, these are little more than symbolic gestures of goodwill. President Trump, too, wants to give the impression that personal diplomacy with Kim Jong-un will pay off, but as was shown by the lack of a deal at last year’s Hanoi summit, personal diplomacy is not enough.

Any progress in dialogue between North Korea and the US has been put on hold with the ongoing COVID-19 pandemic, not least given Trump’s increasingly complex domestic decisions to manage COVID-19. U.S.-DPRK dialogue has stalled, and it seems that the status-quo will be prolonged in the short-term. After the failed Stockholm talks in October last year, the DPRK has increased the bellicosity of its rhetoric towards the U.S.. At the end of the year, Kim Jong-un did warn that a ‘new strategic weapon’ may be demonstrated to the world in the future, and we wait to see as to what such a weapon might comprise.

Amidst a global pandemic, it is difficult to say whether Kim Jong-un will test an ICBM or a nuclear weapon. It is also a question of timing as to whether, and when Kim Jong-un might choose to unveil this ‘new strategic weapon.’ The DPRK has shown it has the capabilities to do so; it is a more an issue of when and why Kim Jong-un may wish to provoke the international community. In light of the present pandemic, any provocation is unlikely to lead to the U.S. to compel North Korea to further dialogue, at least in the short term.

At the same time, however, North Korea has not abandoned its attention-seeking behavior in the midst of a pandemic. The DPRK continues to assert the dubious claim that there are no cases of COVID-19 within the state, and tested short-range missiles in late March of this year. A call to attention, perhaps, given the lack of international focus on North Korea at the time.

Despite Pyongyang’s self-imposed moratorium on long-range and nuclear testing in April 2018, the DPRK asserted earlier this year that it would no longer be bound by the moratorium unless the U.S. abandons its hostile policy. Future missile tests this year, whether of short, intermediate, or long-range missiles, must not be ruled out. In March this year, Kim Jong-un highlighted how “tactical and strategic weapons systems” remained in development. North Korea has, over the years, constantly referred to this notion of a US “hostile policy” to justify its nuclear endeavors; this justification seems to continue into the future, especially as sanctions easing is unlikely in the short-term.

North Korea’s behavior in the past has shown that it has engaged in greater restraint around the time of U.S. presidential elections. In 2004, the DPRK waited for the reelection of George W. Bush, before deciding to rejoin the Six-Party Talks. At the end of the second Obama administration, too, the DPRK showed less interest in dealing with Obama, and greater anticipation for what line the new Trump administration would pursue. North Korea’s behavior does not exist in isolation; it remains highly receptive and reactive to the respective administrations in Washington and Seoul. The DPRK may, therefore, continue this trend, and wait to see the result of the November 2020 elections, before making any further bold pledges – however vague – to the U.S. That is not to say, however, that we may not see missile tests before then.

In looking to the future, the role of South Korea is worth watching. South Korean President Moon Jae-in has expressed his desire to revive more active inter-Korean dialogue after the COVID-19 pandemic has passed. Whether the pro-engagement approach of Moon will foster any substantial progress on US-DPRK relations, remains to be seen.

What must be borne in mind, however, is that Kim Jong-un wants to keep his nuclear weapons, and will only make concessions – however useless and ambiguous – that allow the DPRK to reap benefits. Crucially, as the regime has described, Kim wants the DPRK to maintain its status of a “full-fledged nuclear state.”

Edward Howell is a Lecturer in Politics at New College, University of Oxford. His DPhil research focuses on the Korean Peninsula, and he is the only researcher across the University conducting ongoing research on contemporary North Korea and its international relations. Edward specializes in North Korea’s domestic and foreign policy, particularly its nuclear program, and the relationships between North Korea, the U.S., and the wider international community.