ICBM Test or Talks? Why North Korea Might Negotiate with Joe Biden 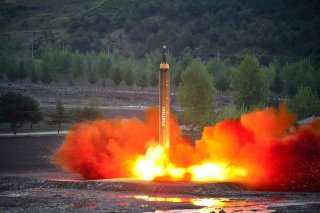 In January Joseph Biden will become president of the United States. North Korea is traditionally a tough nut to crack for new U.S. presidents. New presidents often find it so intractable that they slip easily into the status quo of the semi-permanent containment of the North, perhaps after halting efforts to either engage it or threaten it into better behavior.

President George W. Bush initially sought to coerce North Korea by placing it on the ‘axis of evil;’ later he pivoted to engagement in the Six-Party Talks. Both failed, and the fallback of containment was defacto policy during his term. President Barack Obama initially reached out with the Leap Day Deal. That quickly fell apart, and Obama moved to bolster local alliance relationships instead. Finally, President Donald Trump first sought to coerce – ‘fire and fury’ – then tried engagement – ‘Kim Jong Un and I feel in love.’ Neither worked. The basic relationship between the US and North Korea has been the same for decades.

Given Biden’s establishmentarianism – his deep roots in Washington, his long-standing relationship with the US foreign policy community, including two stints as chairman of the Senate Foreign Relations Committee and eight years as Obama’s vice-president – the easiest prediction is: he will repeat Obama’s approach; the North Koreans will reject any proposed deal as insufficient; the relationship falls back into containment, deterrence, sanction, and isolation.

However, North Korea is now a proper nuclear weapons state with a serious arsenal, including intercontinental ballistic missiles. That might shake-up traditional North Korean thinking, I would argue, along these lines:

Second, nuclear weapons mean North Korea need not provoke the way it used to. North Korea has often greeted incoming U.S. presidents with some kind of misbehavior – a missile test or border incident, for example. This was likely the North’s aggressive deterrence in action: reminding the new president right away that North Korea will not be bullied or dismissed. But nuclear weapons are such a powerful shield, that Pyongyang need not do that anymore. Perhaps it will happen out of habit, but the deep safety provided by nuclear weapons opens up the possibility of a more benign greeting. This is turn could make it easier to for Biden to talk with North Korea. He would not immediately face a mini-crisis in which North Korea was quickly read, yet again, as a dangerous opponent of the U.S. and its allies, with old tropes about North Korea as mad or violent rolled out once again and hawks again dominating the debate.

North Korea would be wise to consider this alternate course. It is more secure now than at any time since the 1980s when its communist patrons – China and the Soviet Union – began to change and move away from it. North Korea is still mostly isolated, but nuclear weapons mean that that isolation will not slide into regime change from without. North Korea suffers from sanctions, but its elite do not. The leaders have long since learned how to shift the pain onto their populations and evade for the foreign items they really want.

North Korea might easily repeat its old habits of provocation and confrontational rhetoric. Given Biden’s traditionalism – he called Kim Jong-un a ‘thug’ on the campaign trail – it would be the easy move, one likely greeted by elements in the elite, such as the army, who are deeply vested in the confrontation with the U.S. and South Korea.

But the security provided by nuclear weapons could also encourage the Northern elite to relax. Why not negotiate with the Americans and the South now? What is there to lose? Biden has already recognized this reality in suggesting that he would be willing to meet Kim Jong-un even though he called him a thug. Nuclear weapons improve the North’s bargaining hand; it would be curious if they forewent that for the same old game.