If Kim Jong-Un Dies, We'll Find out If North Korea Really Is a Monarchy 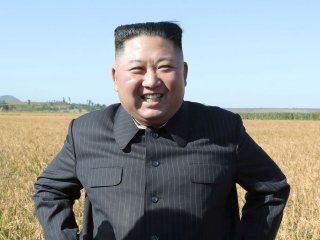 If the now 36-year-old Kim Jong-un, after having reached a reasonable age for dying, dies either suddenly or slowly, he is likely to be succeeded by his son as North Korea’s leader, provided the son proves himself suitable and stays in his father’s favor. Otherwise his son’s younger siblings may have an opportunity.

If Kim Jong-un should die soon, which is unlikely, then the first question to ask is if the North Korean state today is primarily a dynastic or a party state. If it depends completely on the Kim dynasty in the fashion of a classic hereditary monarchy, then the most likely new leader would be Kim Jong-un’s younger sister Kim Yo-jong, who might either take up leadership in her own right or—perhaps more likely—act as regent for her nephew until such time that he may take over.

In the latter case, North Korea might be heading for a classic intra-dynastic rivalry between Kim Jong-un’s sister Kim Yo-jong (born 1987) and wife Ri Sol-ju (born 1989), the mother of Kim Jong-un’s son. I still find this more likely than that Kim Il-sung’s son and Kim Jong-il’s younger brother, the aging diplomat Kim Pyong-il (born 1954) or Kim Jong-un’s elder brother Kim Jong-chul (born 1981), who was bypassed once before, should accede to the supreme leadership.

If the Democratic People’s Republic of Korea (DPRK) is not after all a classic dynasty, but just a seemingly dynastic state, built around the Workers Party of Korea, then other interesting options might appear. The DPRK has become more of a party state under Kim Jong-un than it was under his father Kim Jong-il. After young Kim Jong-un’s assumed (but unlikely) burial, the party leadership might, therefore, take upon itself the task to resolve the succession.

In that case, a likely outcome might be a collective leadership or bureaucratic regency to run the country until such time as Kim Jong-un’s son may assume his responsibilities. We might see the president of the presidium Choe Ryong-hae (born 1950) become the dominant force in a new collective leadership. The party organization might then be further strengthened as the foundation for the DPRK state, much like in Xi Jinping’s China.