To Improve the Lives of North Koreans, Start with Refugees 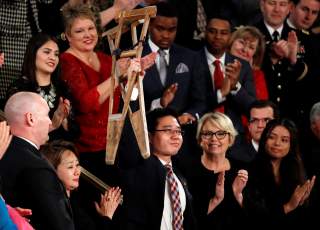 As the leaders from the United States and South Korea struggle to find common ground in their respective approaches to diplomacy with North Korea, there is one thing both have agreed on: economic opportunity awaiting North Korea if it were to denuclearize and join the international community. President Donald Trump has spoken about making leader Kim Jong-un and his cadre of elites rich; while South Korean president Moon Jae-in has focused on prosperity through inter-Korean projects.

Seoul and Washington have yet to convince the regime in Pyongyang to abandon its nuclear weapons by appealing to its purse strings. If they are truly serious about helping the North Korean people, though, then there is a group immediately accessible and in dire need of economic attention: North Korean refugees.

There are currently around thirty thousand North Korean refugees living in South Korea, and a handful in other countries, mainly the United States and Europe. Their public image has largely been formed by defectors who have spoken out on the world stage against the terrors of the repressive North Korean state. However, not everyone who leaves North Korea is politically active, and some are not even strongly opposed to the government in Pyongyang. Rather, most refugees come from the northern provinces bordering China, regions that are impoverished even by North Korean standards, and resettle in South Korea for economic reasons.

Unfortunately, the glamorous life depicted on South Korean TV shows consumed illegally in the North is rarely the reality when migrants arrive in the South. In fact, many face discrimination and suffer serious economic and psychological hardships after resettling.

As policy, the government in Seoul provides North Korean refugees with economic and cultural assimilation training for a few months. Further assistance may include certain stipends, tuition waivers, and housing allowances. But overall, societal integration programs fall short, and South Korea has actually decreased its budget for North Korean refugee-targeted assistance. The majority of migrants lack the fundamental skills and education necessary to thrive in the hyper-competitive South Korean society, resulting in a much higher unemployment rate for North Korean refugees than the general population. Those that do have steady income toil in low-wage jobs in order to support not only themselves, but their families still in the North by sending cash through a system of brokers.

The United States’ record is not much better. Since implementing the North Korean Human Rights Act in 2004, the United States has accepted a paltry total of around two hundred North Korean refugees. Less than ten refugees resettled in 2017–2018 combined. Recently, the Trump administration has ratcheted up its anti-migrant agenda, putting much of the aid used to accommodate potential refugees on the chopping block.

Meanwhile, United Nations sanctions continue squeezing the North Korean economy. The official message from Pyongyang is that it will endure hardship rather than surrender to American pressure. This likely means worsening economic conditions and the possibility that more North Korean citizens will seek opportunities abroad. It sends a particularly poor message when the United States and South Korea, countries that have resettlement policies specifically for North Korean refugees, fail to adequately support those who have already made the monumental decision to escape.

There are numerous civil society groups dedicated to the cause of helping North Korean migrants, but many face financial difficulties. The governments in Seoul and Washington must lead the charge, beginning by treating the resettlement process as a long-term investment and committing more resources to education and vocational programs. Systematic improvements in teaching basic skills that many North Korean refugees lack, such as maintaining good credit, can make a dramatic difference. Improved financial security can also lead to better assimilation and contribute to removing their negative image, increasing their prospects in the South Korean job market.

Improving the lives of refugees is beneficial to their adopted countries as well. South Korea, especially, desperately needs to fortify its economic base in order to confront the challenges on the horizon.

Migrants from North Korea risk their lives and the lives of their families when they escape by communicating from enemy territory and sending remittances. It is time for the United States and South Korea to adopt better economic plans that make that risk worthwhile.

Nate Kerkhoff is the Asia-Pacific Fellow for Young Professionals in Foreign Policy. He received his MA in Global Affairs from Yonsei University in Seoul, South Korea.