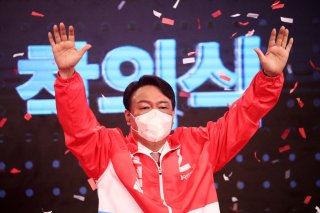 When Pastor Jeon Kwang-hoon took the stage in front of Cheonggye Plaza at 2 pm, March 5, three days before South Korea’s 2022 presidential election, his aide estimated the crowd size at up to 50,000 strong.

That was surely an exaggeration—the media estimated the size of his March 1 rally at 8,000—but the entire 600-foot stretch of concrete from the stage to the entrance of Cheonggyecheon Stream was jam-packed with ardent Christian conservatives waving American and Korean flags. In any case, the massive crowd for the Ten Million Citizen Prayer Rally (Il Cheonman Gukmin Gidohui) far exceeded the 299-person limit on religious assemblies.

Jeon got around the ban by classifying his event as a political rally, which is not subject to size limitations during a campaign period. Critics called the two events “trick rallies” disguised to dodge social distancing rules at a time when Omicron was setting new daily records. But they could just as well have called them political rallies waving the banner of religion.

Both rallies began with speeches by Koo Bon-cheol, an aspiring politician running for the National Assembly on the National Revolution ticket, the party that Jeon founded. That was followed by hours of Jeon railing against President Moon Jae-in and encouraging his followers to vote for opposition People Power Party (PPP) candidate Yoon Seok-youl. (The National Revolution Party holds no seats in the Assembly and is running no candidate in the presidential election.)

Pastor Jeon has been involved in politics for more than a decade, and he has been a thorn in the Moon administration’s side since before the coronavirus pandemic. In 2019, Jeon channeled popular outrage against newly appointed Justice Minister Cho Kuk, who resigned in disgrace following a corruption investigation led by then Chief Prosecutor Yoon. His rallies, in which he labeled Moon a communist, swelled in size. At one, he called on Yoon to arrest Moon. Instead, prosecutors indicted Jeon on charges of violating electoral law by electioneering outside of a campaign period.

He has been campaigning for years, and no number of investigations have slowed him down. In 2007, he and other pastors got behind a conservative candidate for president Lee Myung-bak. Those who did not vote for Lee would “be erased from the book of life,” Jeon said. Lee’s election was a watershed moment for political activism by pastors in Korea.

Before 2020, conservative politicians trying to activate the protestant base would have welcomed Jeon’s support. Saenuri party (the predecessor to today’s PPP) leaders and candidates frequently made pilgrimages to Jeon’s Sarang Jeil Church.

But since August 2020, he’s been a persona non-grata. That’s when he held an “impeach-Moon” rally in Gwanghwamun that many in Korea blamed for contributing to Korea’s second major Covid-19 spike. Over 600 cases were traced to his congregation in the days before and after the rally.

“By refusing to cooperate with the government’s plans to contain COVID-19 while it was still somewhat containable, Jeon has caused a lot of harm to the church’s reputation among young people,” John Lee, a columnist for NK News, said.

In addition, he has made controversial comments about politics, gender, and just about any social issue under the sun. Last year, the Women’s Committee of the Korean Christian Church Council criticized Jeon for allegedly saying “all the women in the genealogy of Jesus are prostitutes” and rationalizing wartime sexual slavery.

“Candidate Yoon and members of the PPP will not share the stage with Jeon,” said Lee Jong-eun, an adjunct faculty at American University. “Already Yoon has been trying hard to avoid criticism for the claims that he met shamans and fortune tellers in the past.”

Yet despite Jeon’s controversial image amongst a broad swath of the electorate, it is undeniable that Jeon commands a large base of believers around the country. Amongst the crowd, many were carrying signs labeled with the names of hometowns far away. Daegu, nearby Jeon’s birthplace of Uiseong in North Gyeongsang province, was one of the largest contingents, but there was even a flag from the progressive stronghold of Gwangju. Jeon’s support could be beneficial in an election with polls showing a dead heat.

During the rally, one woman told me that she was voting for Yoon because of Jeon’s endorsement: “I’m supporting Pastor Jeon. Pastor Jeon is supporting Yoon.”

Jeon’s endorsement could be especially significant in swaying many older conservatives and members of the “Taegukgi army” who were on the fence about Yoon due to his weak ties to the Saenuri/PPP and his past history as a prosecutor. Most of the folks waving the red, white, and blue flags of their own country and its ally were strong supporters of former President Park Geun-hye, daughter of developmental dictator Park Chung-hee, and remained so even after she was impeached, sentenced to prison, and then pardoned.

Over at a rally just 150 feet down the street from Jeon’s, Our Republican Party candidate Cho Won-jin was eviscerating Yoon for having led the investigation into Park that resulted in her conviction. The audience of the two rallies seemed to blend together, and almost everyone in each group was around the same age and waving the same flags.

Gina Lee, an organizer of the Our Republican Party rally, who attended the trials against Park in 2017 as a spectator, said, “There was no justice in his [Yoon’s] trial … Without him, nobody can pardon President Park …We need reconciliation and truth. Yoon Seok-youl cannot make reconciliation in Korea.”

Back at Jeon’s prayer rally, there were a few scattered flags bearing the younger Park’s face and even more banners of her father. The woman I spoke to said Yoon was just doing his job when he investigated Park and her advisors. “But that doesn’t mean that he personally agreed that our past president should have been removed,” she said.

“Many members of the Taegukgi army seem resigned to supporting Yoon,” Lee said. “One reason might be tactical. Voting for Yoon,” who was leading Democratic Party nominee Lee Jae-myung by 1 point in Gallup Korea’s final pre-election poll, “is the only way for them to see change.”

Cho, the ex-Saenuri party representative running on the pro-Park ticket, only receives 0.7 percent of the vote in his best-performing polls.

“Another reason might be that some of them have rationalized Yoon was only doing his job as a prosecutor and those truly responsible for Park’s imprisonment are the current Democratic Party, Moon, and his followers,” Lee said.

Jeon himself had been critical of Yoon early on in the primary campaign. In February 2021, he said, “Yoon just pretends to fight Moon.” But at his rally on March 5, he reassured attendees, “First, don’t worry about Yoon Seok-youl.”

Jeon was full of vigor up on stage, and there was a festive atmosphere in the crowd. A man in Korean military uniform greeted me with a broad smile: “Hello, how are you! … Are you American?”

Jeon’s voice boomed over the microphone, punctuated by the clang of cymbals and drums behind him and the swish of flags waving after each applause line. He has a cocky and crass sense of humor, that of Donald Trump circa 2015. The crowd burst into laughter many times.

Before the rally ended, he told everyone to vote and led a chant of “Hallelujah!”

You can do it louder, he said! Hallelujah!

The crowd began to disperse, heading towards Seoul Station to take trains south to cities and villages across the country. If Jeon has his way, they will be back to celebrate Yoon’s election next week. Just don’t expect Yoon to be there.