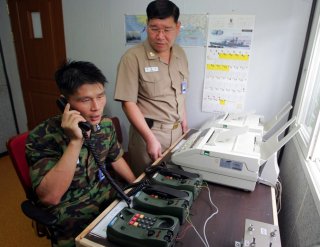 A communications hotline between North and South Korea, which was closed off two months ago, was re-opened on Monday, a sign of North Korea’s attempts to de-escalate tensions in the hope of foreign concessions.

The hotline between Pyongyang and Seoul, over which liaison officers in both nations communicate, is frequently a subject of diplomacy, with North Korea periodically closing it down in response to tensions in the two countries’ relationship.

South Korea’s Unification Ministry, which oversees diplomacy with Pyongyang, released a video of a South Korean soldier talking to his North Korean counterpart, claiming that Seoul was “very pleased” that communication channels had been restored.

One topic of discussion between the two nations concerned fishing along the peninsula’s western coast, where fishing vessels from both sides operate, sometimes leading to small-scale military skirmishes. One purpose of the hotline, Seoul indicated, would be to prevent these incidents through communication.

The hotline in question is a series of phone and fax channels, used by the two Korean states to schedule meetings and arrange border crossings. Though the hotline has been turned off and on several times during the year, it has largely avoided use since 2019, owing to an increase in South Korean balloon-attached leaflets floated across the border to North Korea—a provocation that North Korea has harshly condemned and that South Korea has largely banned for the sake of good relations.

While the hotline was briefly reopened during the summer, it was closed down again after an annual military drill conducted by South Korea, which Pyongyang indicated it perceived as a rehearsal for a land invasion of the country.

The hotline’s re-opening appears to have come about at the request of North Korean Supreme Leader Kim Jong-un, who had earlier acknowledged the degree of North Korea’s problems and suggested that better relations with the rest of the world might be needed.

However, some observers have questioned whether Kim intends to honestly pursue good relations, noting a series of missile tests recently conducted by North Korea—possibly suggesting that the hotline’s restoration is a distraction from the tests, which have been condemned by the UN Security Council.

Negotiations between North Korea and the United States have not resumed in earnest since 2019, after the failure of a high-profile summit between Kim and then-President Donald Trump in Hanoi, Vietnam. North Korea has not tested any ballistic missiles with sufficient range to strike the United States since 2018.