It's Time to Face the Truth on North Korea 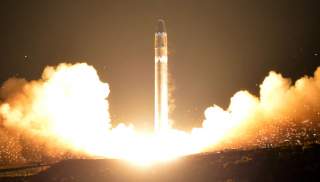 It is time for a blunt assessment of what really matters in the dispute between Washington and Pyongyang, taking emotion out of the equation, and examine the ground truth fundamentals. Such an analysis reveals the best way to ensure American security and prosperity into 2020—and beyond—is through deterrence and diplomacy. The only way we lose is if we foolishly pursue an unprovoked “military solution” to the situation.

A few indisputable facts right off the top. American conventional military power is vastly superior to anything North Korea fields and our nuclear superiority over Pyongyang is a staggering 1,000-to-1. Kim is painfully aware of this military disparity and he factors these realities into his overriding policy priority: regime survival. There are some profound implications of these truths.

First, despite accusations from many corners of U.S. punditry, Kim Jong-un is not an unpredictable and unstable mad man. On the contrary, he is crafty and shrewd. That’s not to say he isn’t a brutal, heartless dictator—evidence confirms he is. But we can exploit his intelligence and desire to live to our benefit. Here’s how.

Kim realizes his position of relative weakness and understands that should he ever launch an unprovoked conventional or nuclear attack on America or our allies, he would be signing his own death warrant. He is, however, quite sophisticated in his ability to play to the emotions of global public opinion.

In this, he takes a page right out of Sun Tzu’s the Art of War, who said that the best way to win a war “consists of breaking the enemy's resistance without fighting.” Above all, Sun Tzu concluded, “when weak, appear strong.”  This is what Kim Jong Un is attempting to do.

He may be unable to win a military exchange with the U.S., but he can appear to be strong through the media by releasing images of frightening-looking missiles, claiming to possess “new strategic weapons,” and giving the impression that he is in control.

The reality, however, is that outside of his borders, Kim commands nothing. North Korea is a weak regional state. While Kim does have the ability to defend his territory and could inflict a serious blow to any who might attack him, he has virtually no ability to project power abroad nor to sustain an attack on his neighbors. Kim is keenly aware of these core realities. Armed with this understanding, what course should America pursue?

First, we should abandon the unrealistic demand that North Korea fully denuclearize before we lift any sanctions. Though the North is comparatively weak, they are not going to disarm for mere promises and give away the only leverage they have to deter the U.S. from attacking them. Trying to force complete and immediate denuclearization guarantees failure and the perpetuation of tense relations.

Instead, we should adopt the preference of our ally South Korea and engage in step-by-step diplomacy with the Kim regime. The South Korean Unification Ministry told me in an email statement that the Seoul government hopes U.S.-North Korean talks will “be held at an early stage to bring substantial progress in accordance with the principle of simultaneous and parallel implementation” of the U.S.-North Korean Singapore agreement.

If Kim agrees to take concrete steps towards peace, the U.S. should be willing to make commensurate incremental moves towards Pyongyang. After a series of confidence-building measures in which both sides prove good to their words, more substantive moves can follow. Eventually, peace between Pyongyang, Washington, and Seoul is possible, which would be a tremendous win for the United States and move increasingly towards the normalization of bilateral relations.

The great thing about pursuing such a détente is that it costs the U.S. virtually nothing. Our security is assured whether there is a deal or not, so we have little to lose if no agreement can be made. But we would reap real benefits if tensions could be lowered and peace accomplished on the Korean peninsula.