Joe Biden Beware: Another Round of Maximum Pressure Will Fail in North Korea 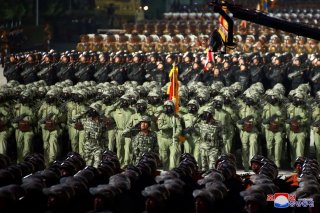 No one knows what the incoming administration will do about North Korea. Candidate Joe Biden indicated his willingness to meet Kim Jong-un with adequate preconditions. But there are potential hardliners in his policy entourage.

For instance, Michele Flournoy, a favorite to be the next Secretary of Defense, is on record opposing negotiation. In the waning days of the presidential campaign four years ago she opined: “I don’t think we should go back to the table without some very clear signals from North Korea that they are reducing their provocations and they are willing to at least implement their previous promises on constraining their nuclear arsenal.”

Ironically, her comments presaged the Trump administration’s initial effort, with maximum economic pressure leavened by threats of war. Explained Flournoy: “I think the only way you’re going to get them to consider that is through additional sanctions, particularly sanctions place on—sanctions that involve pressure from China.” Even that isn’t the end: “All options would be on the table,” she insisted, implicitly threatening military action.

Apparently, President Donald Trump came close to starting a war. Then-Defense Secretary Jim Mattis famously said he was sleeping his clothes to be ready for the midnight call that combat had broken out.

Thankfully, the president switched to diplomacy, though that effort stalled, largely due to his unrealistic expectation of instantaneous denuclearization. Few North Korea watchers believe there is any circumstance under which Kim Jong-un is prepared to fully disarm. Which has left U.S. policy toward Pyongyang in limbo.

Even Flournoy seems to be taking a more realistic position. CFTNI’s Harry Kazianis pointed to her October remarks in which she appeared to accept the need for a more pacific approach, terming the North’s nuclear weapons a “really hard problem” and admitting that it is “hard to see this leader and this regime completely accepting nuclear disarmament.”

Yet there are more than a few hawks in Democratic ranks. For instance, some analysts and politicians have been urging Biden to use the Trump administration’s sanctions on Iran as “leverage” to get a better deal, precisely Trump’s objective. Such an effort would not likely end well: The radicalized leadership in Tehran is unlikely to surrender after Biden’s repudiated the agreement negotiated by the previous administration of which he was part.

Nevertheless, there might be support to do the same with the Democratic People’s Republic of Korea (DPRK). After all, the Obama administration largely avoided dealing with the DPRK, which it saw as a hopeless venture. For some, the experience of the last nearly four years reinforces that earlier judgment. The temptation would be to double down on sanctions, yet again, and hope that China would reinforce enforcement in response to U.S. pressure.

This approach would be a serious mistake, however. Surrender or ouster remains less likely than an explosion or implosion. And the hope that the People’s Republic of China (PRC) would rescue America’s policy looks especially forlorn.

Nuclear weapons have both military and political uses. After the experience of Libya’s Muammar Gaddafi, no foreign strongman can trust the United States or Europe and agree to a denuclearization agreement; it is impossible to unsee the image of Gaddafi’s painful death. Nukes are the only sure deterrent against the world’s hyper-aggressive superpower.

Nuclear weapons also give obvious leverage in political negotiations with Pyongyang’s neighbors. Moreover, nukes offer domestic legitimacy. Kim has finished his father’s and grandfather’s nuclear mission. In keeping with domestic propaganda highlighting the threat from the United States and its allies, he has made the DPRK secure. And, perhaps equally important, he has given the military the ultimate status weapon, building support in the one institution with the capability to remove him from power.

Kim also desires sanctions relief since he hopes to deliver economic growth to his nation. However, for that, he is not willing to pay an unlimited price. Growth would strengthen his regime but not necessarily his control. Rising expectations are probably more threatening to dictatorships than economic hardship. Moreover, pressure on the regime will lessen once the threat of coronavirus moderates; indeed, the pandemic threat already has diminished from China, the North’s most important trading partner.

Of course, the often-unstated goal of sanctions is to rouse the population to revolution. Although Pyongyang is under extraordinary strain, having closed its own borders in response to the coronavirus pandemic, the likelihood of a popular uprising remains very small. In the 1990s at least a half million people died of starvation. Although people turned to private market activities to survive, the Kim dynasty appeared to survive and recover without serious challenge.

North Koreans are much more knowledgeable about and better connected with the world, especially China and South Korea, than before. Nevertheless, the rural population, desperately devoted to survival amid bad times, has little opportunity to rise up. And ruling apparatchiks in the cities, most notably the capital, would be the most obvious losers of upheaval. A merely intra-regime coup would be more likely to change personalities than policies, especially if led by the military. The armed forces are unlikely to trade away the nation’s most potent weapons for unenforceable promises.

Nevertheless, if economic pressure grows to alarming proportions, an explosion is possible. Kim already has a strong incentive to stage a missile or even nuclear test in an attempt to push a Biden administration into negotiations. The more dire his country’s situation, the more dramatic the step he might take.

And Biden would be under strong pressure to respond accordingly. Having attacked Trump for failing in his opening to the North and comparing Kim to Hitler, the incoming president would be vulnerable to criticism that he allowed the North Korean threat to reemerge. That could result in a reversion to Trump era “fire and fury,” increasing the danger of conflict, whether advertent or inadvertent. Which would only reinforce the regime’s view of nukes as absolutely necessary for its security.

The other extreme also is possible. Although the system has proved resilient despite its persistent economic failure, which Kim implicitly acknowledged in his tearful address to the military parade, an implosion is possible. But Washington should be careful what it wishes for. The worst case would be a veritable civil war among competing political and military factions, with an unknown number of nuclear weapons under perhaps no one’s control. Such a conflict could draw in both South Korea and China, with pressure on the United States to intervene as well.

Or a bitter political struggle could open the way for Chinese intervention, perhaps at the invitation of one or another North Korean player. The result might be a more docile DPRK, but also a more secure outpost for Beijing. South Korean hopes for reunification would have gone a-glimmering. The PRC would have strengthened its position vis-à-vis the U.S. in Northeast Asia. And given the current state of U.S.-China relations, Beijing might prefer to leave the North’s nuclear arsenal intact in order to pressure Washington and its regional allies.

Indeed, the deterioration of Sino-American ties effectively eliminates any hope of the PRC’s emergence as a deus ex machina to resolve the nuclear issue. That always has been unlikely. It seems especially far-fetched today.

Contrary to the common assumption that Beijing controls the DPRK, the latter always has been a prickly ally. Although saved by Chinese intervention in the Korean War, Kim Il-sung never gave due credit to Beijing; after all, he was focused on surviving politically after the near debacle caused by his decision to attack the Republic of Korea. Although his regime survived, almost every city of note was leveled. The economy was ruined. And many of his people fled south to freedom.

Kim ruthlessly eliminated the pro-China faction as he consolidated power. He and Mao fell out over the latter’s chaotic rule and criticism of the former’s creation of a communist monarchy. In recent years North Koreans voiced displeasure at Beijing’s pressure for denuclearization; one reason Kim reached out to the U.S. was to balance against the nearer and tougher neighbor. Chinese President Xi Jinping responded accordingly, meeting several times with ROK President Park Geun-hye but refusing to invite Kim to visit.

Notably, that all changed in early 2018 after the Kim-Trump summit was set. Determined not to be sidelined, Xi initiated the first of several summits. Chinese sanctions enforcement eased notably. More recently, there is evidence of Chinese oil and food shipments to the obviously strapped DPRK.

China’s opposition to a North Korean bomb almost certainly is genuine. Nuclear weapons ensure the North’s independence from the PRC and allow the tail to effectively wage the dog, creating instability throughout the region. Far better for Beijing to have effective control over North Korea’s international relations and security. Which Pyongyang would never allow.

However, Beijing also wants to maintain stability. In a similar dispute, would the United States submit to Chinese pressure and agree to apply sufficient pressure on Mexico to blow the country apart, sparking conflict on America’s border and mass refugee flows? Moreover, the ethnic dynamics of the region are complex: China’s border provinces contain a substantial number of ethnic Koreans and both China and the Koreas have historical claims on each other’s lands. Thus, the Xi government is not inclined to apply measures to force denuclearization which might generate instability.