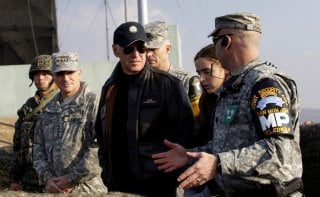 Donald Trump’s North Korea policy has been unlike any other. He came into office threatening to attack and then buddied up with Kim Jong-un in three countries. Now fixated on the election amid disastrous and dismal domestic health, social, and economic challenges, Trump has thrown diplomacy with any country overboard, including North Korea.

North Korea won’t soon forget the unpredictable tacking of Trump’s foreign relations ship, but they will need to deal with a swift and determined turn if Joe Biden takes the helm. Biden won’t be seeking to restore Obama’s foreign policies but rather reform them, and his statements on North Korea suggest specific tactics from drawn from Obama’s rebalance playbook: restoring alliances, refusing summits with dictators, empowering negotiators.

Trump never missed an opportunity on the campaign trail to deride the cost of U.S. bases on allies’ soil, and South Korean officials are growing tired of dealing with the cutbacks and derision. Some fatigued South Korean officials have questioned their faith in a U.S. partnership. But Biden told the New York Times that among the top priorities for his secretary of state would be to restore these alliances. He wrote that Trump has “belittled, undermined, and in some cases abandoned U.S. allies and partners.” Biden has said he will make diplomacy the “premier tool” of US foreign policy and will “rebuild” the State Department.

Second, if Biden is elected, we won’t be seeing any U.S.-North Korea summits. In the months following his meeting with Kim Jong-un in Singapore, Trump said he and Kim were “falling in love” and expressed admiration for the Supreme Leader’s courage at the UN General Assembly. There’s no love lost between Kim and Biden. North Korean state media called Biden a “rapid dog” who deserves to be beaten to death. Biden, who had called Kim a murderous dictator, says he wears those insults as a “badge of honor.” Biden believes these summits legitimize dictators, and are potentially counterproductive. He has unequivocally said he would not continue personal diplomacy with Kim Jong-un.

While leader-level meetings will certainly be off the table, diplomacy would grow more robust and active toward the middle. Consistent with the Biden campaign’s promise to “rebuild” the State Department, a Biden diplomacy with North Korea would empower working-level negotiators—reportedly absent despite Trump’s purported love and respect for Kim. This would restore a technocratic and bureaucratized approach to foreign policy practice, compared to Trump’s personalized one. Based on how deep Biden’s foreign policy team already rolls, he’ll be set to staff and carry out these promises soon into his term if elected.

Darcie Draudt is advisor for public policy at StratWays Group and a PhD candidate in the Department of Political Science at Johns Hopkins University.